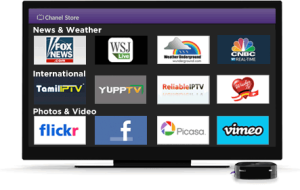 U.K. owners of the streaming media set-top box Roku are getting a significant addition to the available content lineup today with an official BBC iPlayer channel.

Following Netflix’s lead, Roku launched its line of streaming media set-top boxes in the UK and Ireland back in January with a fraction of the channels offered by its U.S. counterpart. The company’s set-top boxes allow people to stream over 40 channels of content on their televisions, including video, music, social and gaming services. Some of the channels offered include Netflix, Crackle MLB.tv, UFC, Classical TV, TuneIn, Facebook, Flickr, and others.

The BBC iPlayer, which offers public television programs on an on-demand basis, is one of the biggest streaming video services in the country, with people consuming over 187 million shows per month on average. While most people in the U.K. consume iPlayer content on a desktop via web browser, I’d imaging it will be a nice option to play it on the big screen with all the other streaming channel options.

Many are still speculating that Roku will eventually add another big channel to its lineup in the next few months—Netflix competitor LoveFlim, which is owned by Amazon.