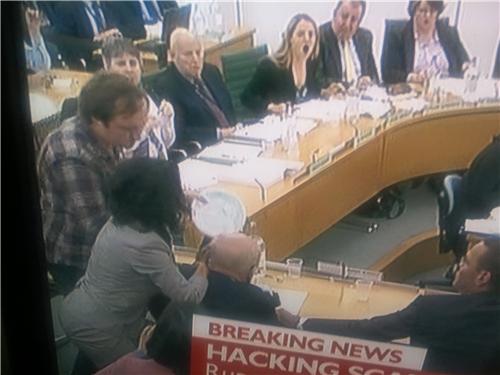 Media mogul and News Corp. founder Rupert Murdoch was reportedly attacked by a pie-thrower during hearings before members of the British Parliament Tuesday.

According to live reports, a man threw a “white substance” at Murdoch during the hearings before the House of Commons Culture Committee. The screen capture above, posted by Reuters’ Felix Salmon on a liveblog of the hearings, clearly shows a pie of some kind in the hands of the plaid shirt-wearing assailant. It appears that News Corp. attorney Janet Nova (in grey) blocked the shot, while Murdoch’s wife Wendi Deng came in over Nova’s shoulder to slap (or perhaps right-hook) the pie thrower. Murdoch was not hit.

Murdoch may be most famous as the billionaire owner of one of the world’s largest media companies, but it’s worth remembering that he started with little more than a small Australian newspaper. He is, as Steve Forbes recently wrote in a strangely laudatory profile that compares Murdoch to Alexander the Great and banker A.P. Giannini, a quintessential businessman.

“Murdoch is a genuine entrepreneur, who created News Corp. and did so in ways that no business school would teach,” Forbes wrote.

The NYT blog The Lede has a 30-second video of the pie-throwing incident (see below). The hearing was briefly suspended and video coverage turned off after the event, but has since resumed.

The pie-throwing incident gave a surreal twist to the hearings, which are aimed at uncovering more information about the allegations of voicemail hacking by employees of the Murdoch-owned (and now shuttered) News of the World. According to the BBC, which has live coverage of the Murdoch hearings, members of parliament have been grilling Murdoch, his son James Murdoch, and other executives on the company’s role during the phone-hacking scandal. Employees of the Murdoch-owned News of the World are alleged to have hacked into the voicemail accounts of a murder victim and bribed police for inside information.

“I wish we had managed to see and solve these problems much earlier,” Murdoch told the committee.

Ex-News International CEO and former News of the World editor Rebekah Brooks, who resigned earlier this week, will be questioned by the committee later.