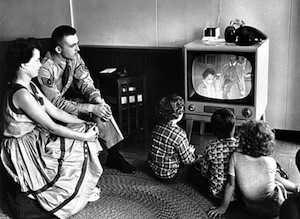 Is the future of television entirely online? When you look at new TV products from Apple and Google, it’s clear tech companies think that could be the case. But there’s also a sense that the shift is only coming … sometime, in the hazy future.

Say Media says things are changing faster than you might think. The online advertising company, which was formed when video ad startup VideoEgg acquired blogging technology company Six Apart, recently conducted a study with IPG Media Lab, Tru, and comScore. It found that almost 56 million Americans belong to a group that the study categorized as “Off the Grid” — they spend more time watching non-live videos (say a YouTube video, or a TV show recorded on DVR) than they spend watching live TV. That’s nearly one-third of the online adult population in the United States, Say Media said.

Now, you might remember a New York Times/CBS survey published in August which found that 88 percent of respondents still paid for TV service, and that only 15 percent of those paying subscribers had even considered “cord-cutting”, i.e., replacing live television with video websites like Hulu. When I brought up the survey, Brian Monahan, vice president of IPG Media Labs, explained that this new study looks at a different phenomenon.

The “Off the Grid” crowd probably isn’t canceling its cable service — it’s just not watching those shows live. And even if that isn’t an immediate threat to the cable providers, it’s a growing problem for advertisers, Monahan said. If you’re watching a video on YouTube or Hulu, you’re seeing far fewer ads than you would on TV, and on DVD or DVR you’re skipping the ads altogether. And when these Off-the-Grid viewers watch traditional live TV, they see the ads as “16 or so wasted minutes.”

Perhaps it’s not surprising that Say Media vice president of solutions Matt Rosenberg said the answer is for advertisers to create ads that are less intrusive than forcing you to watch 30 seconds of video. Instead, they should be placed “in the consumer’s eyeshot but not in their face,” — in other words, the kind of online advertising that Say Media tries to deliver.

“I’m not saying this makes an advertiser’s life easier,” Rosenberg said. “It doesn’t.”

It also sounds like the study consolidates results from two surveys. comScore ran an online survey of 1,159 consumers, while Tru conducted eight in-home interviews with San Francisco and Chicago households identified as Off the Grid. Say Media further divided the Off the Grid respondents into two groups — the On Demanders who still watch live TV, but spend more time watching streaming video, and the Opt Out group that doesn’t watch any live television.

I guess I fall into Opt Out, since I haven’t owned a television that could play live TV since I moved to San Francisco in 2008.