While unlimited ebook subscription services are a relatively recent trend, Scribd may have just become the clear winner. At least for now.

Today Scribd is adding over 30,000 audio books to its existing unlimited ebook subscription service. The audio books are being offered as a complimentary perk to those already dishing out the monthly fee, which makes Scribd far more attractive to consumers than rival services Oyster and Amazon-owned Kindle Unlimited. The added audio book selection is also likely to be a big hit with people who spend a decent amount of time commuting home from work — especially with the connected car movement picking up steam thanks to the debut of Apple’s CarPlay and Google’s Android Drive platforms.

Personally, I’ve listened to exactly one audio book on CD from my car, and yes, it was an enormous pain in the ass. You never know when one CD is about to end. And if you’re driving, fumbling with the CD case to insert the next disc (the correct disc, since there are usually six or more) can be dangerous.

But in terms of competition, Scribd was already more attractive than Kindle Unlimited because its ebook library features titles from most major publishers. The same is true of its new audio book selection. There’s a decent number of recognizable audio book titles for people who don’t usually call themselves readers (Divergent, The Hunger Games, No Country for Old Men, The Spy Who Loved Me, etc.) as well as plenty of other classic titles, new releases, children’s books, and more. The audio books feature narration from tons of notable actors, too (James Earl Jones, Paul Giamatti, Denzel Washington, among others). 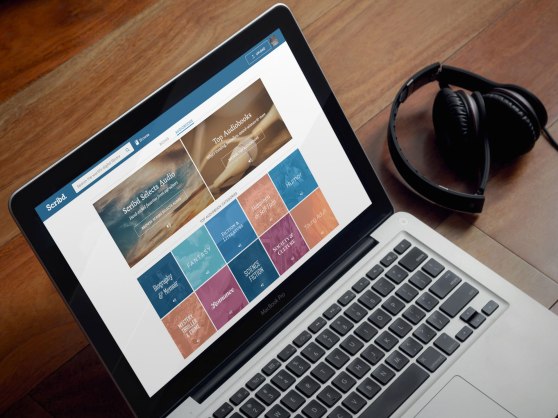 To help you find audio books available on Scribd, the service has added a new section. And the ebook listings will also now show you that there’s an audio version. Once you start playing an audio book, the controls are very similar to music players. You have the option to play, pause, or skip to the next chapteras well as buttons that let you skip ahead or skip backward easily. By default, the skipping buttons are set to 30 seconds, but Friedman explained that you can customize the number of seconds based on preference. (That’s something I totally wasn’t expecting.)

Friedman also told me he thinks the biggest advantage Scribd’s new audio book selection offers is its price. The service (both ebooks and audio books) runs $9 per month, which is a bargain in most cases, as many audio book titles range from $10 to $30. So Scribd is giving you a deal before you even purchase a single audio book.

The low pricing advantage is even more staggering when comparing Scribd to Amazon-owned Audible, the leader in digital audio book sales. For instance, if you wanted to buy the audio book version of Divergent on Audible, it would cost you $28. Or you could buy that title as a Kindle ebook ($6) and upgrade to the audio version for another $13.

Audible also offers an audio book subscription service of its own. For $15 per month, you’ll get one “free” title per month and 30 percent off all other purchases. The service emphasizes that you can “return” books you don’t like and exchange them for another, but as these are digital files, the entire concept of “returning” and “exchanging” is very outdated. However, Audible does have a much wider selection of titles, which might be perfect for folks who only ever read a single book at a time. (And, yes, it is worth noting that Kindle Unlimited does offer complimentary audio book versions on some titles. But the service’s selection of ebooks leaves much to be desired, as previously mentioned.)

Clearly, Amazon is in a position to make Kindle Unlimited and Audible more competitive with Scribd. But for now, Scribd seems like the best deal for book lovers.