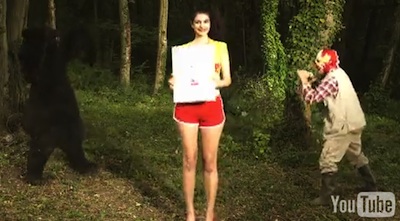 Nice timing. Just a few hours after The New York Times reported that YouTube’s ad revenues have grown to the point that the Google-owned video site will be profitable this year, I spotted a video that demonstrates some of YouTube’s potential as an advertising platform.

Called “A hunter shoots a bear,” the video was apparently uploaded last month, but it starting to get noticed by sites like Metafilter today. It’s an ad for Tipp-Ex brand correction fluid, reportedly created by French agency Buzzman. It features a hunter refusing to shoot a bear, reaching outside the video to grab Tipp-Ex from the ad running alongside, then using Tipp-Ex to change the video title. He asks the viewer to offer suggestions about what happens next, and acts out those suggestions.

It’s definitely possible to stump the ad with words or phrases that it doesn’t understand, but it recognizes (and plays videos to illustrate) a lot more words than I expected. (My favorite so far: “A hunter is a bear.”) And if you’ve got a dirty/sophomoric mind, Tipp-Ex has you covered, too.

These kinds of interactive ads aren’t unprecedented. The most well-known example is probably the Subservient Chicken, a Burger King ad (that ran on its own site, not YouTube). The Old Spice YouTube campaign from earlier this year was another illustration of how humor and interactivity can lead to hits. But YouTube has struggled with attracting expensive, premium advertisers in the past — I think the Tipp-Ex video offers a great counterexample of how advertisers can actually use the site to their advantage.

You can view the video at http://www.youtube.com/tippexperience/.