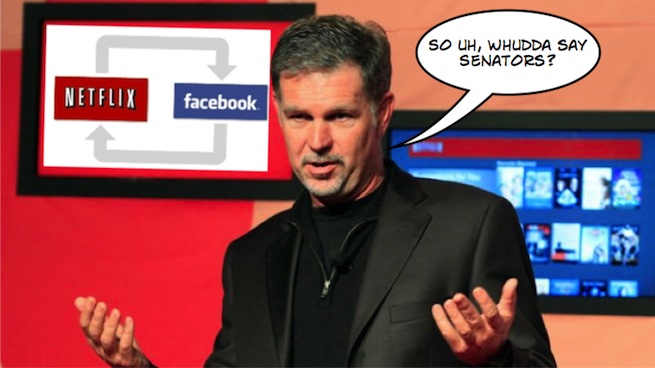 The senate is expected to vote on an amendment next week that would allow video rental services like Netflix to take advantage of deeper integration with social networks like Facebook.

Despite being the country’s largest streaming movie service, Netflix is noticeably absent from Facebook’s Timeline feature due to a 1988 law that forbids video rental services from sharing a customer’s rental history. The law, Video Privacy Protection Act (VPPA), was initially created for the purpose of concealing physical media rentals, but congress has refused to say if digital video rentals also fall under the law’s jurisdiction.

As a cautionary measure, Netflix, which offers both physical and streaming rental services, has operated as if the VPPA did apply to digital media. This is why services like Hulu feature deep Facebook integration, while Netflix does not. In February, the company also decided play it safe by settling a class action suit related to violating the VPPA, as VentureBeat previously reported. The settlement cost the company $9 million, and made them agree to delete all rental history data from a customer a year after they formally cancel their subscription.

Not being able to utilize Facebook is something that Netflix desperately wants for its U.S. service. Several media services — including Spotify, Ustream, Viddy, and others  — that previously integrated with Facebook’s Timeline have experienced huge traffic and subscriber growth. Facebook integration has also helped grow Netflix service in international markets, the company stated in its Q2 2012 earnings report.

But despite its setbacks, Netflix is taking steps to persuade congress to change the VPPA law.

In April, Netflix formed its own Political Action Committee (PAC) called FLIXPAC to help rally congress on issues important to its business (like a VPPA amendment). The company has spent a total of $395,000 this year on lobbying efforts, according to political news site The Hill. Also, the House passed legislation in December 2011 that would give Netflix permission to share data via Facebook with a subscriber’s consent.

The amendment, which Sen. Patrick Leahy (D-Vt.) drafted, could be voted on next week as part of another cyber security bill. Leahy’s involvement is particularly interesting because he previously wasn’t keen on allowing rental data to be shared in any form. During a senate hearing in February, Leahy even described the aforementioned House bill as “dominant corporate interests (enticing) a check off in order to receive what may seem like a fun new app or service.”

Leahy’s change of heart could have something to do with senate democrats trying to gain support for an amended version of the Lieberman-Collins Cyber Security Act (aka the senate version of CISPA), which the senate is also expected to vote on next week.