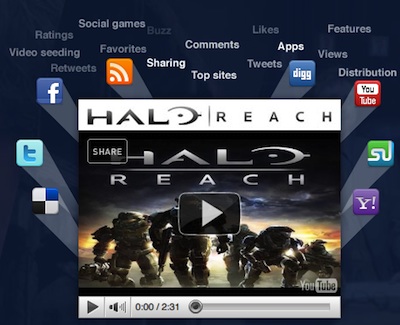 Sharethrough, a video ad startup that has assembled an impressive team of investors and advisors, just announced that it has raised $5 million in its first round of funding.

The San Francisco company says it’s not just another video ad network. Instead, as the name implies, it’s focused distributing videos in a way that maximizes viewer sharing — not only does that increase the number of eyeballs, but Sharehtrough says that viewers who watch a video because it was shared by a friend will watch for three times longer than they would watch a paid commercial, average.

In the funding press release, Sharethrough says the old method of creating social video hits was basically “post and pray.” The company replaces that with features in areas aimed at making the process more reliable: It starts with video ads that include sharing features for social networking sites and elsewhere; those ads are then pushed to Sharethrough’s network of social websites, games, applications, and advertising exchanges; they’re tracked on an analytics dashboard; advertisers get detailed data about who’s watching and sharing their ads; and Sharethrough also reaches out to video sites and blogs to attract additional coverage.

The company has performed more than 200 video ad campaigns for brands like Sony, Xbox, and General Motors — you can see sample campaigns here.