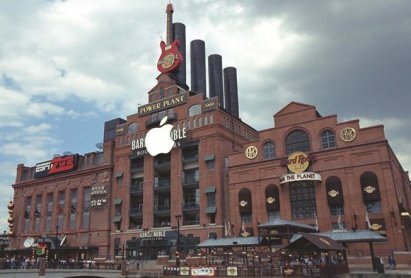 The news itself seems ridiculous and is most likely false, but it’s an interesting thought experiment. Let’s take a look at the wisdom and stupidity of Apple purchasing B&N, and feel free to weigh in with your own thoughts in our poll below.

Apple has $76.2 billion in cash, the company reported last week in its third quarter earnings. So it could conceivably purchase Barnes & Noble, which has a market cap of $1.06 billion, without feeling a big dent in its pocketbook. But the move would be highly unusual for Apple, since it has so far focused on smaller and strategic acquisitions.

Apple’s biggest acquisition so far was its 1997 purchase of Steve Jobs’ NeXT for $400 million. That’s followed up by Apple’s 2008 purchase of P.A. Semi for $278 million, and the $275 million purchase of Quattro Wireless in 2010. All of those acquisitions had clear goals: Acquiring NeXT helped Apple to build OS X; nabbing P.A. Semi gave Apple the engineering talent it needed for its custom iPhone and iPad chips; and the Quattro purchase gave Apple a leg up in mobile advertising with iAds.

It’s far less clear what acquiring Barnes & Noble would do for Apple. BGR argues that Barnes & Noble’s digital library of books and magazines could be useful to Apple’s iBooks store, but that library consists of licensing deals that Apple is already in the process of scoring. There’s also the obvious advantage of nabbing more retail space, but at the moment it doesn’t seem like Apple needs much more. The company has also prided itself on making its stores seem different from traditional retail outlets, so B&N locations would need a significant overhaul to look the part.

“I don’t think B&N would be a great acquisition for Apple as it probably could replicate the e-books licenses fairly quickly and likely on good terms for its iTunes holdings,” Jack Gold, the founder and principal analyst of J. Gold Associates, told VentureBeat. “And B&N really wouldn’t make Apple all that much more competitive against Amazon’s threats, given Amazon’s diverse array of businesses. So would this be a good idea? Not in my opinion. I actually think B&N would be a better fit for Google than for Apple.”

There’s also the question of what would happen to Barnes & Noble’s Nook e-readers, which last year earned a healthy second place spot against Amazon’s Kindle. Having cheap e-reading devices (the latest Nooks start at $139) could help Apple to drive more sales to its iBooks store, and it would be a useful alternative to the $499 iPad for many consumers who just want to read. But Barnes & Noble’s $249 Android-powered Nook Color, which has found success as an inexpensive tablet, would likely be killed off by Apple.