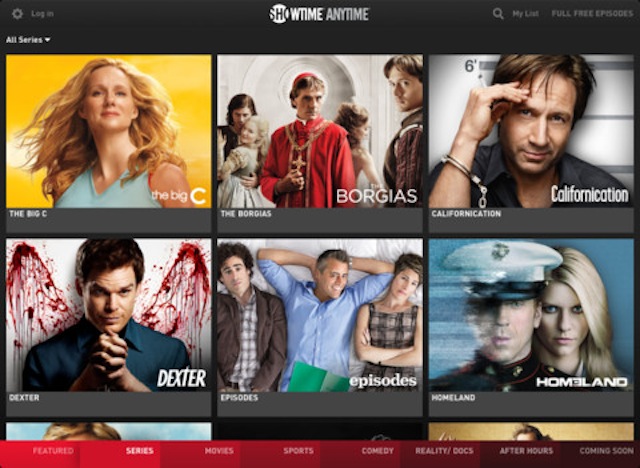 The app, called Showtime AnyTime, gives you On Demand streaming access to most of the network’s library of movies, documentaries and comedy specials. But the crown jewel of the app is definitely the backlog of Showtime original programs, such as Weeds, Dexter, Homeland, Californication, Shameless, Nurse Jackie, The Big C and several others.

It’s unknown if Showtime plans to add an incentive for subscribers to use the app by making episodes of its original programs available a week before it debuts through the cable channels. Previously, HBO used this strategy during the most recent seasons of its original shows Game of Thrones and True Blood.

While the app is free to download in Apple’s App Store, only people who pay for a Showtime content package through AT&T Uverse or Verizon FiOS. Comcast is expected to add access to Showtime content through its Xfinity TV web service and mobile applications. But its unlikely Comcast customers will ever gain access to the Showtime Anytime App itself. The same is true for HBO content and access to the HBO Go iOS app.

As for the app’s user experience, it’s pretty much what you’d expect from a streaming video service. You’ve got the ability to create your own queue of favorite shows, options to share viewing activity via Facebook & Twitter, rate shows and more. And much like Netflix, the Showtime Anytime app remembers where you stop watching a video, and allows you to start again at the same moment no matter what device you’re on. This will be a useful feature when Showtime adds support for other connected mobile devices.

The company plans to launch Showtime Anytime on the iPhone as well as several Android OS devices in the coming months.