The last American space shuttle, STS-135, lifted off this morning, bringing to a close a remarkable era in U.S. technological dominance.

In 1981, I watched the launch of Columbia on the only television in the house, which normally was only used as a monitor for my Apple II+. As a no-television house, I had to get special permission to use the monitor as a TV, tuning in to a grainy broadcast signal coming over the rabbit ears.

In 2011, I watched the launch (with my family) on an HDTV which we connected to a laptop, using the computer to display the high-definition video signal from NASA TV. In other words, we repurposed the family TV as a monitor.

Both times, the hair on the back of my neck stood up as I watched, transfixed. As BoingBoing’s Xeni Jardin commented, “This is the closest, emotionally speaking, that science gets to church.” I agree.

The space shuttle-PC connection is not just a personal thing. The arc of the shuttle program parallels the history of personal computing, and American technology, in other ways.

In 1981, the personal computer revolution was just getting underway. Tandy and Apple had successful PCs, but the most successful one of all the IBM PC, was only months away from its debut. Graphical user interfaces and the internet were known in the halls of research labs and computer science departments, but few had direct experience with either. Onboard the first shuttle was one of the first computerized flight control systems used in a spacecraft. And a few years later, one of the earliest laptops, a GRiD Compass, flew in a shuttle orbiter.

The link between the space program and the commercial technology industry goes back even farther. In the 1960s, the space program drove forward spending on electronics, since the rockets and electronics that controlled them often needed custom creations from the early semiconductor companies. That custom work helped the chip makers refine their designs and eventually ship them for commercial purposes. Michio Kaku pointed out in his book Physics of the Future that an ordinary musical birthday card has a chip in it these days that has more computing power than NASA used to put a man on the moon.

In 2011, the personal computing revolution is over: Computers are everywhere now, and no one even calls them PCs much anymore. Computing is nearly as ubiquitous as electricity: It’s in our pockets, in our cars, on our wrists and may soon even be in our clothes, shoes and cereal boxes, if near field communications and RFID tags become more ubiquitous. The new technology revolutions are focused on mobile technology, mobile payments and social media, not to mention biotech and cleantech. Fittingly, there was even an iPhone aboard the final shuttle mission.

I can’t help but feeling that this closes a door on an era of American inventiveness overall. With the end of the shuttle program, the only way for humans to get into space — for now — is aboard an aging fleet of Russian rockets. Space startups like SpaceX and Virgin Galactic are pushing towards commercial spaceflight, but so far the private sector has nothing even close to the scale, power and range of the shuttle program.

And in the broader, non-aerospace field, American ingenuity no longer dominates the tech world the way it did in the 1980s. Silicon Valley has been joined by Silicon Alley, Israel, Russia, India, Japan and countless other hubs of invention and innovation. Taiwan, which was known for making cheap plastic goods in the 1980s, has turned into the dominant manufacturer of computers and technology equipment (with much of the actual manufacturing outsourced to China), and does a good deal of design and invention work as well.

The world is more interconnected, more technologically enabled than ever before, and for the most part that’s been an overwhelmingly positive development.

I just hope that Americans can hold on to that spirit of technical ambition, and continue pushing technology forward in new and ridiculously ambitious ways. I’d hate for the shuttle to be the final chapter in that journey.

Photo: STS-135 lifting off on NASA TV, as seen in the living room of my house. Photo credit: Dylan Tweney. 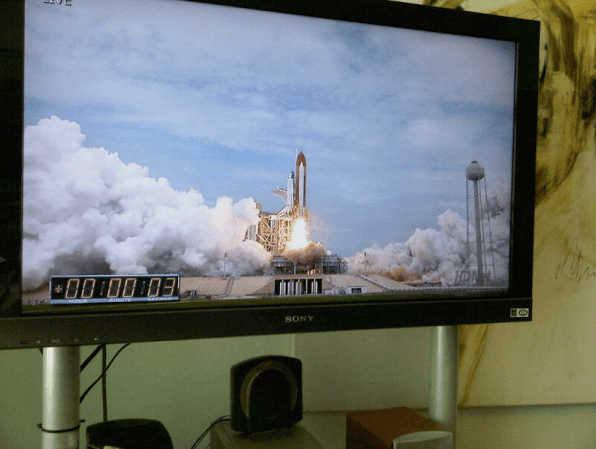 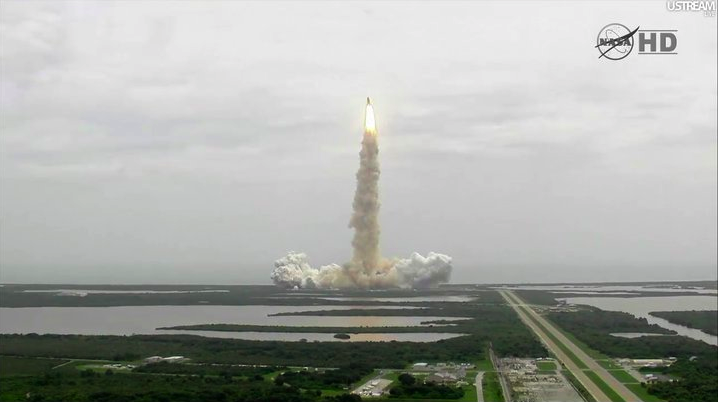