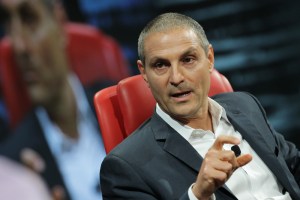 Hollywood super-agent Ari Emanuel has a temper. The tech industry better get used to it, because he’s looking north toward Silicon Valley.

Emanuel has built a respected and feared reputation as one of the leading power brokers in Hollywood. The head of the William Morris Endeavor agency, he’s the inspiration for the foul-mouthed, quick-to-anger agent in HBO’s “Entourage.” And when he spoke to a crowd of technorati at the 10th annual All Things Digital conference last night in Rancho Palos Verdes, Calif., he didn’t disappoint.

Within minutes he was describing the technology as mere “pipes,” a taboo point of view that most in the tech industry would prefer to ignore. And by the end of his time on stage, he was showing his temper in a knock-down argument with Joshua Topolsky, the editor of tech site The Verge.

When asked to describe himself, he said, “I’m a nightmare.”

Silicon Valley is clearly in his sights. Silverlake Partners, a Silicon-Valley based private equity company, bought a reported 31 percent stake in WMA earlier this month. WMA has made investments in cloud-based graphics rendering company Otoy, Emanuel said, as well as other tech companies. And he made numerous comments during the evening that demonstrated he understands the strategic value and the important of digital content delivery. He watches movies on his iPad, he has a Roku and an Apple TV at home, and he understands that an increasing number of people, especially young people, are consuming media through the internet, via game consoles, or through DVRs.

“I don’t think a lot of people watch linear TV, but people are consuming a lot of TV,” Emanuel said.

There is one thing Emanuel wants, though: Better policing of international content piracy. And he thinks Google, Verizon, and AT&T are best positioned to make that happen.

“Internationally, there has to be some mechanism to filter people who are stealing things,” Emanuel said. (Update 5/31: Check out Google’s response to Emanuel.)

Now, he’s not sure he has the solution. Emanuel acknowledged right off the bat that SOPA was a bad bill. Nevertheless, he thinks there has to be a solution, and that Silicon Valley companies will be forced to recognize this because of their need for movies, music, and TV.

“One day they’re going to figure out that they’re just big pipes, and they need premium content,” Emanuel said, referring to Silicon Valley tech companies. “Eventually, I think people are going to pay. Not for two cats on a couch doing what they’re doing, but for Aaron Sorkin.”

The catch is that right now, there’s no economic way to make for-pay internet content support the quality of content Emanuel is talking about, Emanuel said, and that means that cable companies’ lock on the shows you want to watch is going to continue for the foreseeable future.

Emanuel doesn’t have the answers. But he definitely sees the shifting tectonics of the entertainment industry, and recognizes the growing importance of tech companies as a distribution channel. That means we’re likely to be seeing a lot more of him.

Watch this video for a taste of Emanuel’s perspective and his temper, and check out AllThingsD’s liveblog of Emanuel’s appearance.

Corrected 9am Pacific: An earlier version of this story mistakenly said that Entourage was an NBC show.