Last week, my wife and I were received an invitation from Six Flags Discovery Kingdom in Vallejo, California, to stop by for a preview of its new attraction. One of the park’s existing coasters, Kong, was being converted into an immersive virtual reality experience using a large number of Samsung Gear VR headsets. 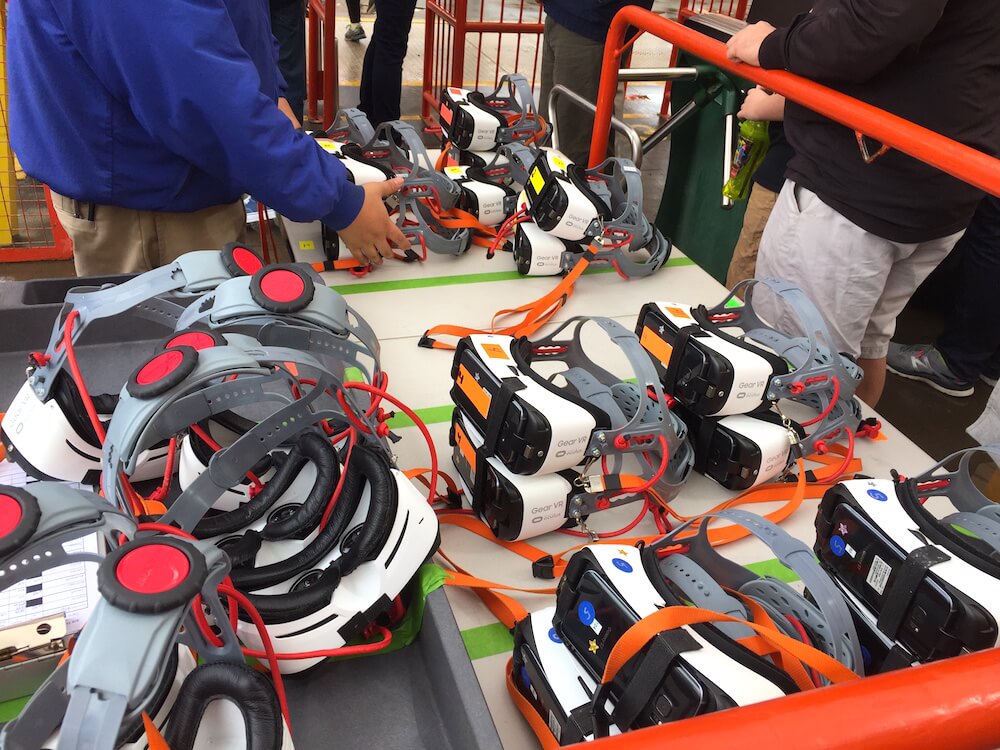 Above: Galactic Attack uses VR to enhance its roller coaster.

UploadVR has tried VR from Six Flags before, but this time was different. Before the ride we were each given a headset to wear that came with a specially designed VR experience. This experience would be mapped to the movements of the coaster itself and was intended to make us feel as though we were hurtling through outer space rather than hurtling around a chunk of Northern California.

The Gear VRs themselves had special, reinforced head straps. These plastic contraptions were meant to do two things: ensure the headset stayed on through the dips, twists and loops Kong has to offer, and to make the process of head strap adjustment simpler for a mass audience. Unlike the standard Gear VR strap, which uses cloth and Velcro to achieve a tight fit, these modified versions featured a simple wheel in the back that turn to the right or left to tighten and loosen the device on your face. This design is similar to that of HTC’s new Deluxe Vive head strap, and it worked well for the crowd I was riding with.

Once the headset is on, you’ll see a view of the real world provided by the pass-through camera. The view looks like you have some sort of sci-fi space helmet on. Think the in-armor views in an Iron Man movie. I was just getting used to all of this when the ride began. 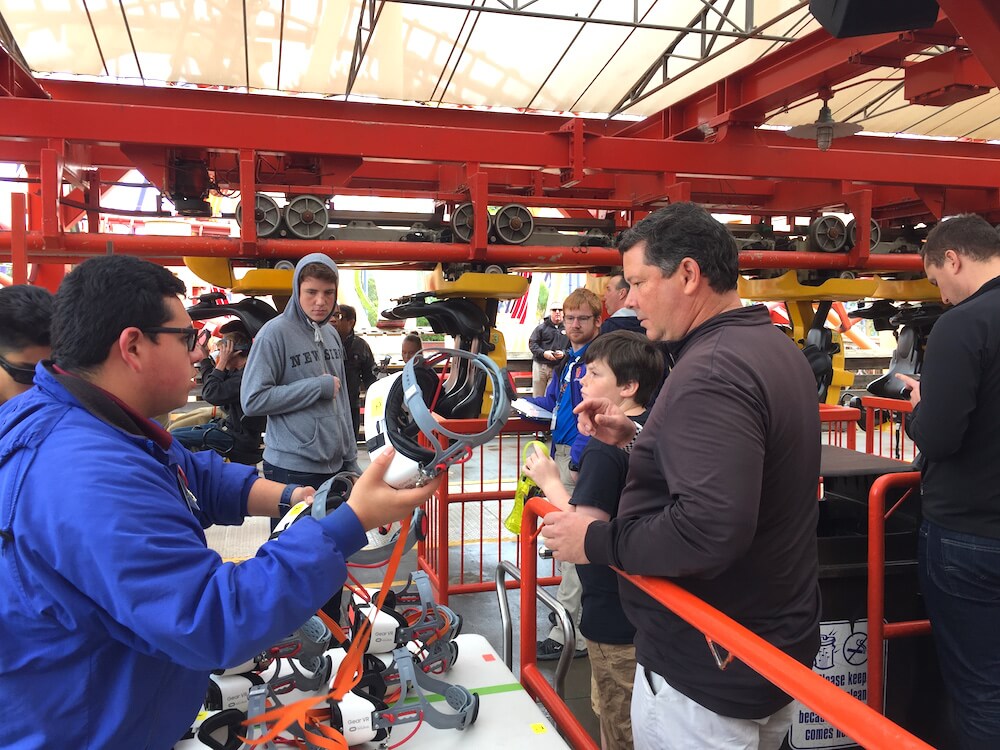 Above: Discovery Kingdom visitors wait in line to put on their Samsung Gear headsets.

I don’t know if I mentioned before, but I’m scared of roller coasters. The worst part is always that first hill. You’re locked tightly into your seat, you’re at a weird angle, and there’s nothing to do but watch yourself get higher and higher above the safety of the ground. Usually I’d be reduced to a catatonic state of anxiety at this point, however, with the Gear VR on my head I was being treated to a wonderful, and distracting, showcase of lights and sounds.

As we went up the first hill it looked like we were entering some kind of “hyper space.” Then, when we hit that first drop, suddenly I was in the cockpit of a spaceship rocketing through the cosmos. I looped, swooped, and soared my way through asteroids and around other spaceships.

About halfway through the ride I realized that there were lasers shooting out of my ship that I could aim with my gaze. I tried my best to shoot down as many enemy ships as I could, but 15 seconds later the ride was over.

As we pulled back into the station, I realized two things: It was fun, and I had completely forgotten about being scared. 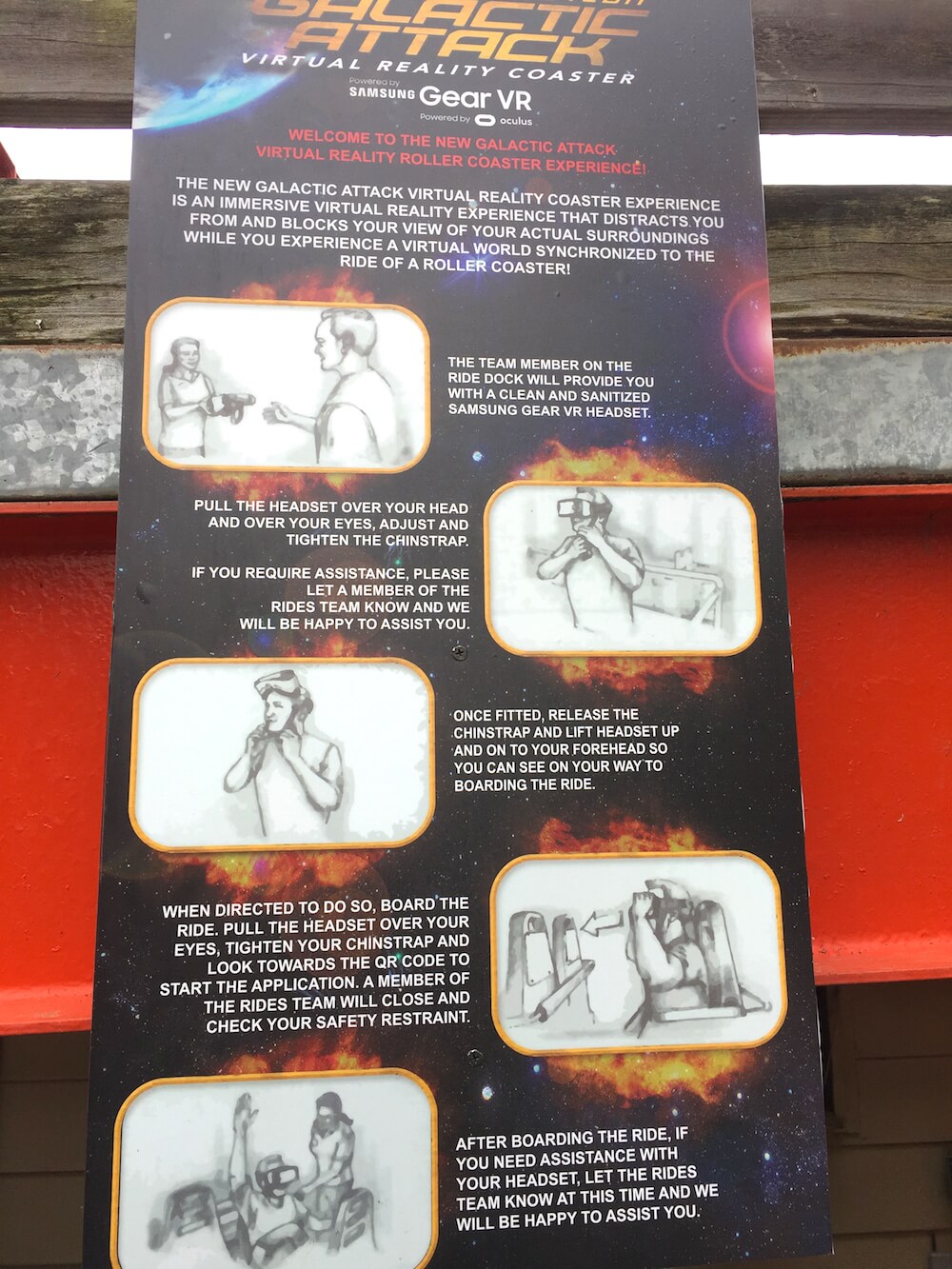 Above: For many at Discovery Kingdom, putting on a headset is a first-time experience.

Thanks to VR I was able to enjoy a roller coaster more than I ever have. I was so busy engaging with the experience that I didn’t have the time or attention to focus on the fact that one mechanical failure and I’d fly to an early death.

We asked Six Flags a few questions about this experience and the others they are working on. Brett Petit, the senior VP of marketing and sales for Six Flags, provided some answers.

UploadVR: It seems like the Gear VR is stepping up its Roller Coaster rollout (pun!) even more lately. What sort of goals do you have for programs like this? Where do you see the future of immersive theme park rides going?

Six Flags: The Samsung and Six Flags collaboration enables millions of consumers to experience virtual reality for the first time by bringing Samsung Gear VR to theme parks across the country. Through the use of this technology, we have the ability to provide our guests with a myriad of immersive, innovative experiences each time they visit a Six Flags park. These “real world to virtual world” storylines can be created for different types of roller coasters and attractions. The possibilities are endless, which is exciting. 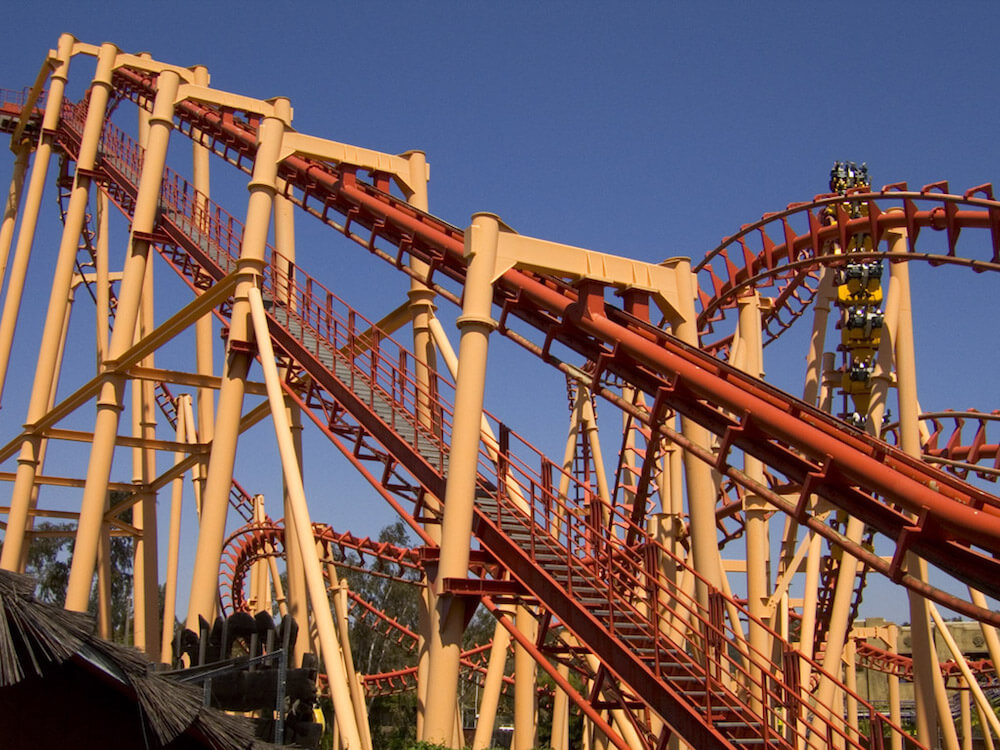 Six Flags: As the technology evolves, our goal is to keep updating the VR content and experience – with the interactivity component being the latest addition.  Riders are literally “part of the action” inside this virtual reality gaming experience, with the ability (on The New Revolution Galactic Attack) to choose three different paths within the game, which can affect their final score. Additionally, in this iteration, we have tapped into the passthrough camera on Samsung Gear VR to allow riders to see the “real world” including the person seated next to them – along with virtual content. Overall, if you are someone who loves riding roller coasters and playing video games, this is the ultimate experience.

UploadVR: One thing I did notice is that without being able to see the turns and drops up ahead it was harder to be physically ready for them. This made the ride feel rough, especially on my neck. Is this a concern and if so how will you address it?

Six Flags: Millions of guests have used Samsung Gear VR to become fully immersed on our VR coasters. Overall, our guest’s feedback is that VR greatly enhances the experience – many saying that they “don’t feel like they are even on a coaster.”