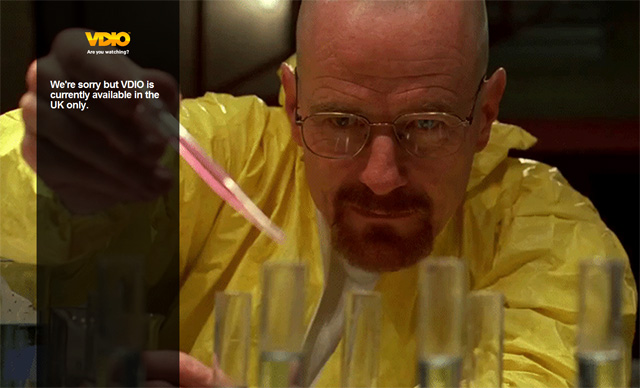 One of the founders of Skype and Rdio has decided to make a run at Netflix and Hulu with a mysterious new video service called Vdio, according to a GigaOM report.

Janus Friis, the co-creator of Skype, Kazaa, Joost and Rdio, has kept Vdio a secret for as long as two years and received $5.6 million in funding in Oct. 2010 while the company was listed under the name Project WBS. At present, Vdio.com is simply a splash page featuring high-quality animations from many movie and TV properties, including shows like Breaking Bad (pictured), Mad Men and Justified, as well as movies like Enter the Dragon and A Few Good Men. If you are the in the U.S. like I am, the screen says the service is only available in the U.K. If you are in the U.K., the splash page says “Coming soon to the UK.”

Since the startup has only collected $5.6 million in funding, I find it hard to believe this will act as a serious competitor to Netflix’s streaming service out the gate. But if Vdio’s model uses advertising paired with partner-provided content, it could be dangerous to Hulu. And if given the opportunity to grow and collect more funds under a subscription model, it could be a threat to Netflix, especially because Netflix has done nothing but agitate users this year with price bumps and a botched plan to move physical DVD rentals to another website.

We still don’t know much about Vdio, but I think it’s safe to make a few assumptions. Since the company comes from the people behind the excellent music streaming service Rdio, this new venture will likely be primarily subscription-based and highly social, with integration from Facebook and Twitter. Instead of streaming music, Vdio will probably streaming TV and movies, based on what we see on the Vdio splash pages.

Rdio recently launched a free element to its music subscription service as well, which gives users some free access to the huge Rdio catalog without ever needing to offer a credit card. Vdio might take this approach as well as a way to get users interested in the service.

Joost, a previous Friis venture, also dealt with video. It was a web TV service founded in 2006 that originally centered around peer-to-peer video technology. Now the site is a simple (and bland) YouTube-like hub for content like movie trailers and short TV clips.

Do you think the guys originally behind Skype and Rdio have a chance to make a dent in online videos with Vdio?

Update: The story originally indicated that Vdio was a venture by both of the Skype and Rdio founders. The company was in fact founded by only one of the Skype founders, Janus Friis.