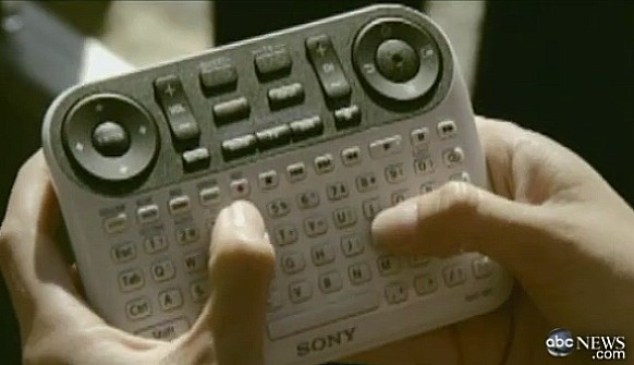 Google offered ABC’s Nightline a glimpse at Google TV tonight (see video below), and with it came our first look at Sony’s proposed Google TV controller for its new internet-enabled televisions.

At first glance, the controller seems incredibly busy and is reminiscent of the horrendous Atari Jaguar gamepad. It has a full QWERTY keyboard, two circular directional pads, and pretty much every video function you’d need.

But while it’s certainly functional, it doesn’t appear to be very user-friendly. Sony seems to have created a next-generation nightmare of a TV remote. I can’t imagine anybody could look at Sony’s Google TV controller and not have a spontaneous seizure.

Then again, at least Sony is trying to adapt a keyboard to the living room. Logitech’s solution for its Google TV set-top box, the Revue, is to simply bundle a keyboard with media buttons. While the Revue keyboard does appear thinner than typical PC keyboards, it’s still much bigger than any other controller people keep in their living rooms.

When it comes to remotes, Google TV partners can take a cue from Boxee — the web video startup that has developed a nifty remote for its upcoming set-top box. One side of the remote contains a simple directional pad and a few buttons, while the other features a thumb-friendly keyboard.

Boxee’s remote is an elegant solution to the problem of bringing a keyboard to the living room — but it’s also clear that Google and its partners have other solutions in mind. In the Nightline segment, we also see Google’s Rishi Chandra using an Android phone to control a Google TV interface — something that was mentioned when Google TV was first announced. Using a phone means you’ll be able to take advantage of its software keyboard, and you’ll also be able to search Google TV content with your voice.

We’ll be hearing more about Google TV in the next few weeks. Logitech is holding its Revue unveiling later today, and Sony will officially unveil its Google TV televisions on October 12.