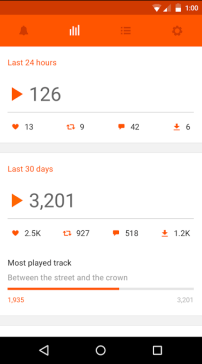 With SoundCloud Pulse for Android, DJs, podcasters, and other online broadcasters can access a dedicated portal to manage their account and community, letting them respond to comments, view stats such as how many times a track has been played in a month or week, and follow other SoundCloud users.

With more than $120 million in funding and 175 million unique monthly listeners, SoundCloud has built a sizable audience since its launch out of Sweden in 2007. But unlike other streaming services such as Spotify, SoundCloud places a heavier emphasis on indie creators than on major studios, so this app should service its creator community well.

SoundCloud Pulse is similar to Google’s YouTube Creator Studio, which offers YouTubers a dedicated app to manage their account and community.

Though it’s only available on Android for now, SoundCloud does say that it will be landing on iOS in the future, and it will introduce more features, including more in-depth stats, expanded messaging capabilities, and more.