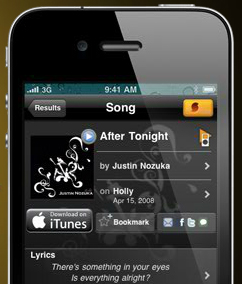 SoundHound has a lot of similarities to rival Shazam: Its iOS and Android apps analyze particular sounds to determine the name of a song playing. Users can also hum or sing a song to get a result. The app also provides lyrics, song previews and YouTube videos connected to particular songs.

SoundHound has had a nice couple of months. On top of a recent iOS app update that integrated SoundHound with Apple’s iCloud service, the company announced in late August that it had partnered with streaming music startup Spotify to give European users access to Spotify’s catalog of more than 15 million tracks.

In terms of traffic, SoundHound also looks strong. In the 30-day period between Sept. 21 and Oct. 20, SoundHound registered up to 30 million hits per day with peak traffic at more than 2 million hits per hour. “This first peek at our usage metrics reveals some impressive numbers, but the story behind the numbers is just as big a deal,” said Keyvan Mohajer, CEO of SoundHound, in a statement.

SoundHound is currently available on iPhone, iPad, iPod Touch and Android devices. The free version of the app is ad-supported, while the paid version costs $6.99 on iOS and $4.99 on Android and gives users many more features and no ads.

San Jose, Calif.-based SoundHound was founded in 2005 and has received funding from the likes of Global Catalyst Partners, TransLink Capital, Walden Venture Capital and others.