To say Silicon Valley is an “interesting” place may be an understatement, and there are things that cause us to pause every now and then, such as the absurdity surrounding venture capital, valuations, accelerators, press coverage, accolades, and more. They say it’s important that we learn to laugh our ourselves, which is perhaps why the musical South of Market was created. This 75-minute show parodies everything techies in San Francisco fawn over while also bringing to light major issues such as diversity, gentrification, and what really matters.

The message of this amusing performance by people who actually work in the tech industry is to put yourself above all the trivial things and “believe in yourself” (yeah, it does sound cliche, huh?).

At the Z Space in San Francisco, VentureBeat attended an advance preview of South of Market, with the understanding that the show was still working out some of the kinks. The cast had only been in the building for 48 hours, for example, and problems with the sound engineering was quite noticeable throughout the performance. However, that didn’t diminish the entertainment value. Hopefully in future shows, the problems will have been solved.

If you love the HBO series Silicon Valley, you’ll find humor in watching South of Market; as it’s filled with au courant conversations, such as references to Zenefits Z2 platform, Soylent, Android Nougat, Salesforce’s new tower headquarters, Uber and on-demand service ratings, Pokémon Go, and even a renovated Dolores Park (for those outside of San Francisco, it’s a park where everyone enjoys hanging out on nice days). There’s even a joke about having to sacrifice things, like Jack Dorsey giving up Twitter (wow). 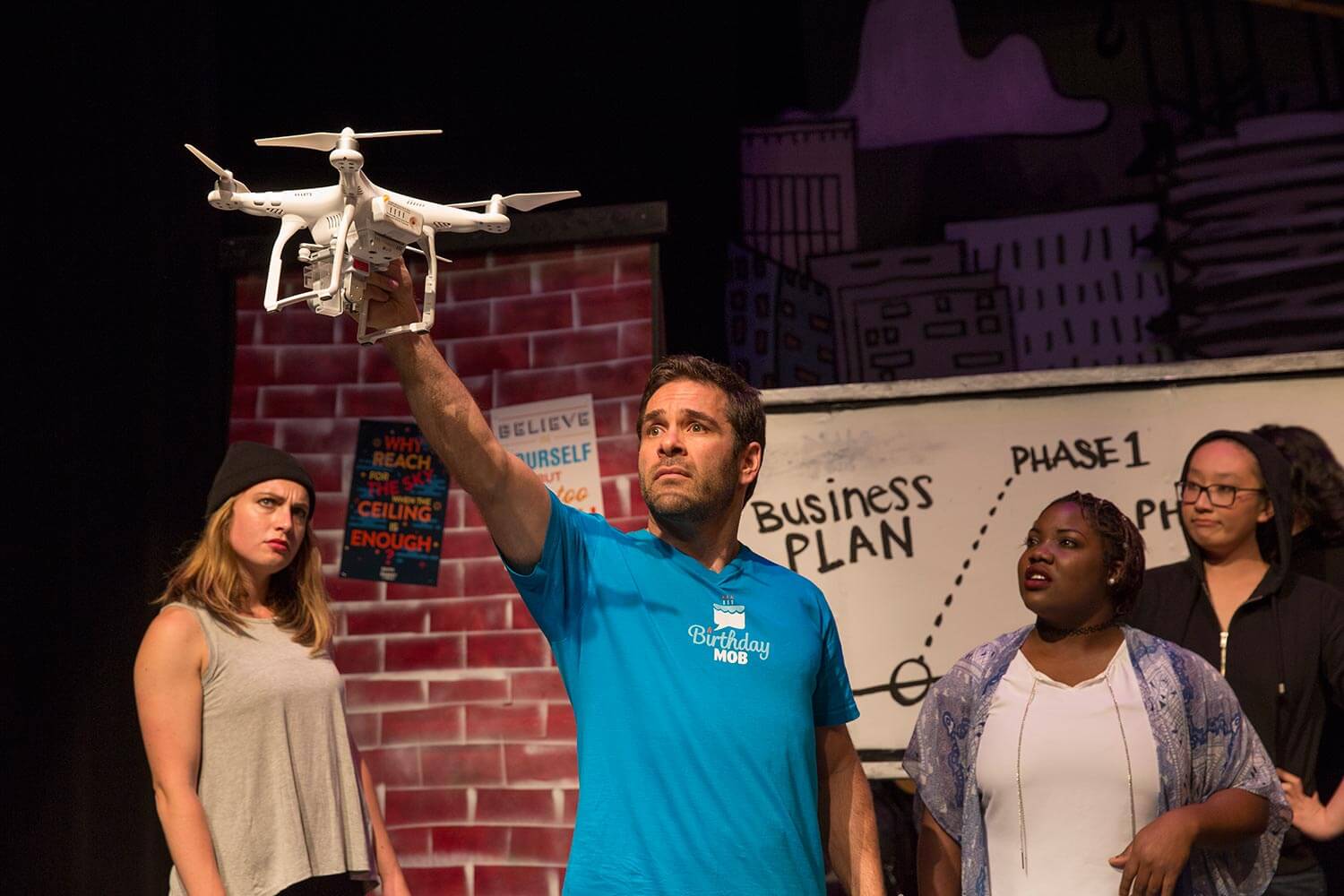 South of Market is a short tale about an entrepreneur who’s about to turn 30 who becomes preoccupied with making it onto the Forbes 30 Under 30 list after his friends all get accepted. He pulls out all the stops to get nominated by trying to build a great product, but basically burns it to the ground as he obsesses over getting the accolade.

The star of the show is Riley, played by Emergence Capital principal Jake Saper. He’s joined at his fictitious startup — which no one really knows what it does — by Delia (voiceover artist Morgan Pate) and lead engineer Anish (Ginger.io data scientist Shishir Dash). The trio of actors certainly play convincing roles as entrepreneurs and people we might typically associate in Silicon Valley. Riley is the boastful chief executive who heaps up a lot of buzzwords and nonsensical terms to impress venture capitalists, while Delia is the take-charge executive with more practical ideas. Anish represents engineers, viewed as royalty in the tech industry, who even quipped at one point, “I’m an engineer, I can own a third of any startup.”

South of Market is made up of a mix of people living the Silicon Valley dream, including TechCrunch’s Sam O’Keefe and The Wall Street Journal‘s venture capital reporter Rolfe Winkler, and professional theater performers. Winkler’s performance as the managing partner of made-up firm Value Add Venture (“We used to be known as On-Demand Ventures”) is hilarious because he buys into the buzzwords being fed to him by Riley. The show also makes reference to Sequoia Capital and Lightspeed Venture Partners. 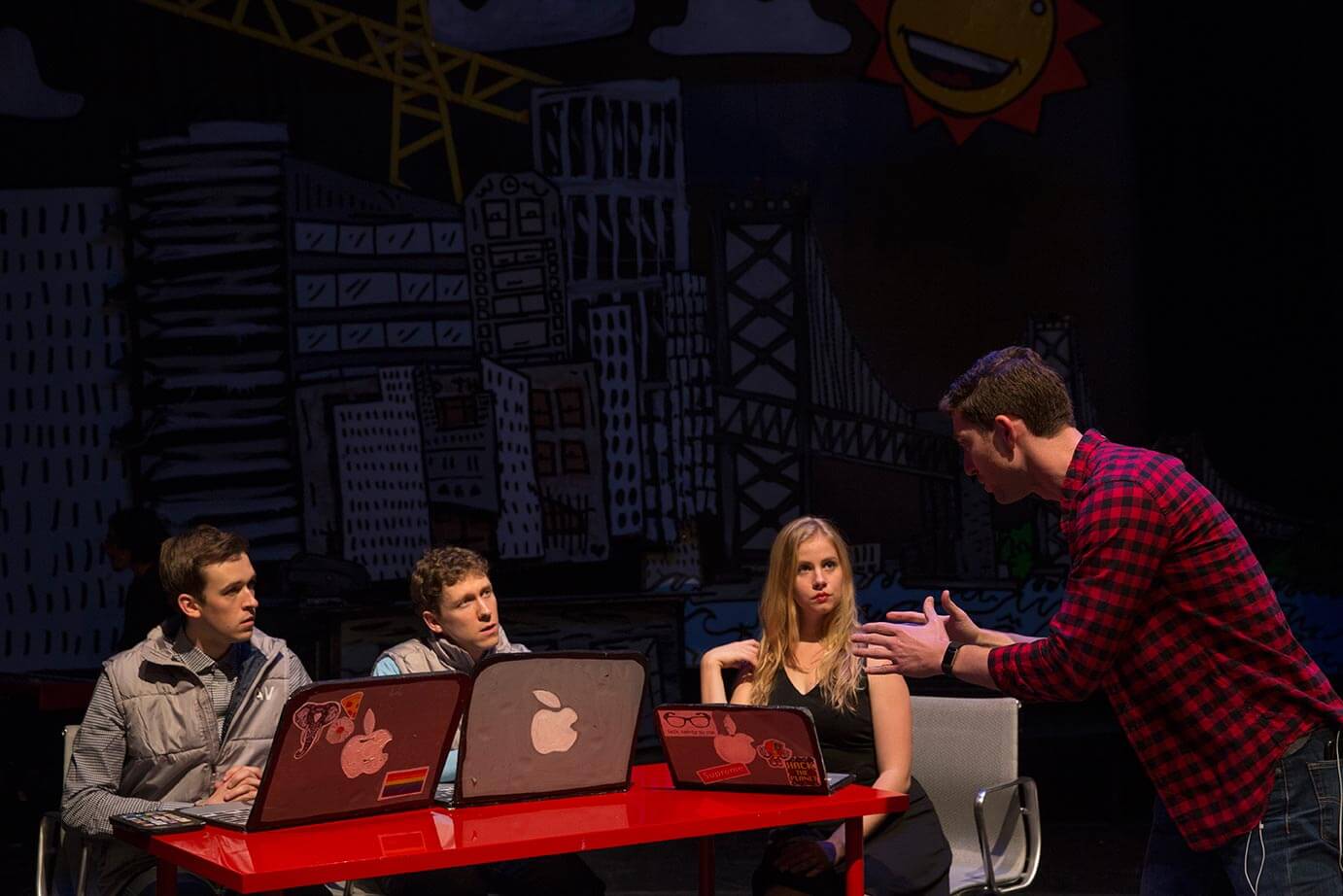 But the show is not only about what makes the tech industry crazy. It also addresses many of the current issues that have been in the headlines over the past year. It highlights the growing homeless population and the fact that people can’t afford to live in San Francisco — in one scene, a construction worker is asked about how affordable housing is going, and he responds that it’s going to be affordable all right, but for Salesforce executives.

There’s also a point where Winkler’s character ignores Delia when first meeting with the fictitious startup, perhaps not recognizing that she’s part of the leadership team. However, Value Add Ventures has three female partners who are in talent, operations, and communications.

The show’s producers explained that the point of the show is to poke fun at everything that goes right and wrong in the tech industry: “The title not only reflects SoMa (South of Market), but evokes what happens when your company or idea doesn’t quite make the cut. But that’s OK. For every thousand that don’t, one will.”

South of Market: The Musical will only be playing for a limited time, running from October 20-23, but all shows appear to have sold out. It’s also the first of what is said will be an annual original music comedy that the creators will put on. Oh, next year should be interesting.

The musical is the brainchild of Pat Blute.