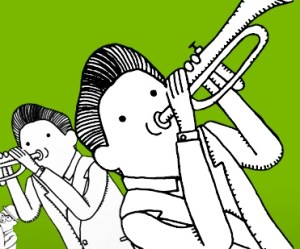 The much-hyped European music service Spotify is launching today in the U.S. We covered the news yesterday, but a few of the more important details, such as pricing and levels or service, weren’t available until now.

Spotify will launch with three tiers for pricing and service. First, there’s Spotify Free, which lets users listen to music from the service on their computer for nothing and pays for itself using advertising. To get access to the free version, users must have an invitation.

To join the service, you have to first download Spotify’s software.

Sweden-based Spotify initially launched in Europe in October 2008, and much to the envy of U.S. music fans, Europeans talked about the 15-million-song service as if it were the greatest thing since the invention of the Internet. Finally U.S. users are getting a taste with today’s launch.

“We’re so excited to bring what we humbly feel is the best music service in the world to the U.S. today,” said Ken Parks, Chief Content Officer and Managing Director of Spotify North America. “The response has already been amazing and we hope that people in the U.S. will love Spotify as much as they do in Europe.”

Two areas Spotify hopes to stand out with are social experience and the catalog. With social, the company lets users share tracks and playlists with friends with a single click. Users can sign into Facebook for even more integration with already established connections. The other area is the company’s music catalog, which consists of 15 million tracks.

The biggest established competitors to Spotify in the U.S. are MOG, Rdio, Rhapsody, and Napster. Spotify hopes to challenge those properties with hype, the promise of free music, and a strong financial backing that includes support of the all the major U.S. record companies.

Spotify currently has 10 million users worldwide, with 1 million paid subscribers. The company has raised $120 million so far and is valued at about $1 billion. It recently finished raising a round of financing from Russia’s DST, the investment company that has previously backed Facebook, Groupon and Zynga.

Spotify’s U.S. introduction video is below: