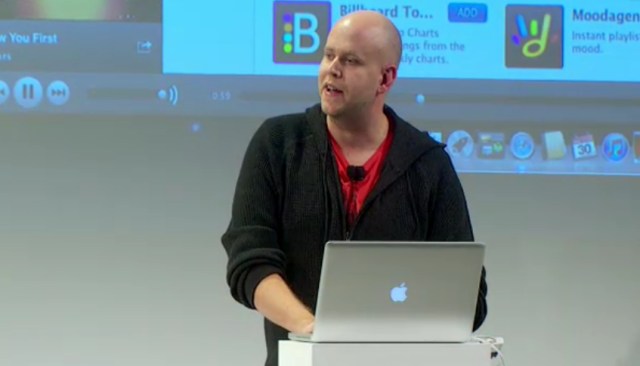 The streaming music service announced its new app platform today at a New York City press conference, with early partners that include Rolling Stone and Last.fm.

Spotify CEO Daniel Ek (pictured above) said that all of the apps will be available to both free and premium customers. At the moment, the apps will only be available on Spotify’s desktop software, but Ek said the company could implement apps on its mobile software if they end up being popular. (Basically, it’s going to happen eventually.)

Ek started the event by giving a (very) brief history of digital music, and he talked about how Napster was a major influence on him. But, of course, the big problem with Napster was that it was illegal.

“You need a better product than piracy to get people to start paying again,” Ek said. He went on to say that availability was another important element of digital music and that the optimal digital music solution needs to be available everywhere.

Spotify currently has 15 million songs available, and it’s adding 20,000 tracks every day, Ek said. The company has paid $150 million to record labels so far, and it’s the second-biggest digital revenue source for record labels after iTunes. Spotify announced last week that it had reached a new milestone of 2.5 million paying customers. The apps could convince more Spotify users to pay for premium accounts, since that’s the only way you can listen to the service on mobile devices.

More than a third of the Swedish population uses Spotify, and Ek said that has reduced music piracy in the country by 25 percent.

“Playlists are kind of like the new mix tape,” he said about the company’s social music playlists, which can be shared with friends. Since partnering with Facebook, the company has noticed that music sharing has gone way up.

One of the company’s first app partners is Rolling Stone Magazine, which will be creating new playlists every day to highlight cool new music. Its app will also house reviews and other music recommendations. Last.fm will also have a Spotify app available, which will let you “scrobble” music to share what you’re listening to with other Last.fm members.

Ek also showed off Tunewiki, an app that synchronizes songs with lyrics, making it easy to sing along. Songkick also has an app that makes it easy to find and book concerts from right within Spotify.

With apps, Spotify finally has a significant new feature to lord over streaming music competitors like Rdio and Mog. It’s also a nice bit of positive news for the company after it was canned by the record label distributor STHoldings. The apps turn Spotify into something more than just a streaming music service — now, Spotify can be the center of your musical universe.