Spotify now claims 100 million monthly active users (MAUs) as paying subscribers, with its overall user base up 26% year-on-year (YoY) and 5% since the last quarter.

The Swedish music streaming giant’s latest earnings reveal that its MAUs increased from 173 million in Q1 2018 and 207 million in Q4 2018 to 217 million in Q1 2019. However, its premium subscribers — those who pay $10 per month — hit the 100 million user mark precisely, a notable milestone for the company as it seeks to increase income from those who choose to pay hard cash.

This means Spotify’s premium subscriptions increased by 32% YoY and 4% since the last quarter, while ad-supported users climbed by 21% and 6%, respectively.

Digging down into Spotify’s financials reveals that its total revenue increased 33% YoY to €1.5 billion ($1.7 billion), though the company is back to racking up losses after posting its first ever operating profit during the previous quarter. This was to be expected, however, as Spotify previously said it anticipated posting a loss of between $228 million and $410 million for the whole of 2019, due to an increase in expenses. For Q1 2019, it claimed an increase in operating expenses of 30% YoY to €420 million ($468 million), leading to an operating loss of €47 million ($52 million). 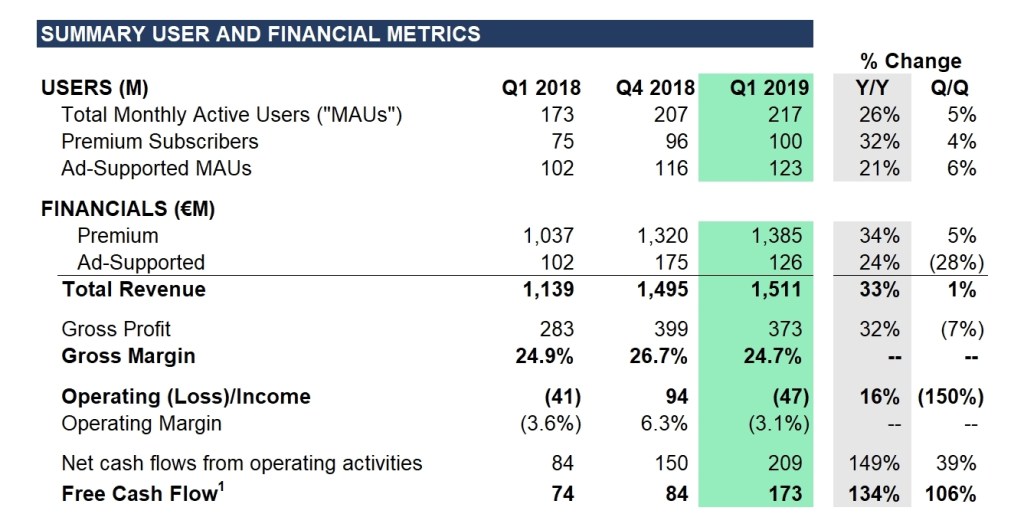 Above: Spotify’s Q1 2019 earnings show encouraging signs in terms of users and revenue, but not for profits.

So while Spotify would obviously like to find a sustainable economic streaming model that made it a consistent profit, its overall numbers are looking healthy in terms of people actually using its platform. This was aided somewhat by its recent launch in India, where it now claims 2 million users, and Spotify also pointed to strong growth for its family plan in North America, a price drop for the Spotify Premium/Hulu bundle in the U.S., and a partnership expansion with Google that gives out free Google Home Mini smart speakers to Family Plan account holders in the U.S., U.K., and France.

“We believe that voice speakers are a critical area of growth, particularly for music and podcasts, and we intend to continue to pursue opportunities to expand our presence in that area,” the company said.

With that in mind, Spotify has been investing heavily in podcasting over the past few months, beginning with the acquisitions of podcasting startups Gimlet Media and Anchor and followed by the purchase of story-based podcasting studio Parcast last month. The company’s push into podcasting will likely underpin more of its future ad-supported revenue, which actually increased 24% YoY, according to its latest figures, though that number fell 28% on the previous quarter due to what Spotify called “pricing-related” issues, which it has since corrected.

“We expect the revenue from podcasts to accelerate through 2019,” the company said. “Over time, our ambition is to develop a more robust advertising solution for podcasts that will allow us to layer in the kind of targeting, measurement, and reporting capabilities we have for the core ad-supported business.”