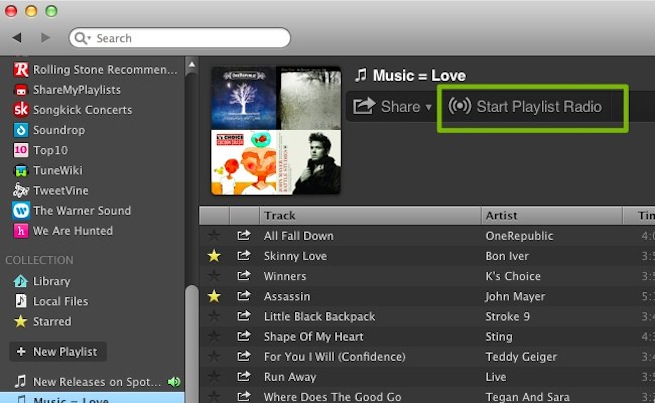 Streaming music service Spotify is rolling out a new version of its desktop software for Windows and Mac today, adding a handful of new features and improved functionality.

Version 0.8.3 of Spotify includes the ability to create custom radio stations based on a particular playlist or album, much in the same way Pandora does with artists or genres. That station will then play music that’s similar to the playlist/album of your choosing. The feature is sure to delight the subset of people who like to mix corny hip-hop with twangy country oldies.

The new version also includes a new “Instant Search” feature, which allows you to hover over search suggestions as you type to get instantly rendered results in the main view. While this is a small change, it’s definitely the little things that count, such as past additions like crossfading and gapless playback.

The company is also boosting Spotify’s social sharing capabilities in the latest software version. The HTML code that will embed a “play button” on other websites/blogs, which launched last month, can now be obtained by right clicking on any album, playlist, or track. The company has also added custom short URL spoti.fi for Twitter as well as deeper Tumblr integration that lets users share music content from Spotify directly to their Tumblr page. Sharing is a key component of Spotify’s success, with Facebook’s Timeline integration being attributed to its massive user growth in the last year.

Spotify is also trying to raise awareness of its new app platform, which brings tons of social features to the streaming service. Yesterday, the startup added two apps — Tastebuds.fm and Fellody — that allow its users to find a new romantic interest base on their musical tastes and discover new music from their social circles.

The new version of the app is rolling out to users now, and it should be completed over the next few days. Those who don’t want to wait can download the update from Spotify’s website.