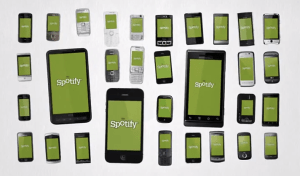 With an invite to Spotify’s just-launched music service, people in the United States can now listen to 15 million songs on their computers for six months, for free. Now go tell your family and friends, because that’s exactly what European music service Spotify wants you to do.

“We’ve been lucky enough that 99% of our users say they’d recommend us to friends,” a Spotify spokesperson tells VentureBeat. Naturally, the company’s marketing plan capitalizes on that. “We’re launching an amazing music service and if our users like it as much as we think they’re going to, we encourage them to tell their friends and we’ll do everything we can to optimise this network effect,” said the spokesperson.

The marketing trick appears to be working for Spotify, which launched today in the U.S. after weeks of speculation. Details of the launch are now available, but they are coming to us slowly. The big news today is that there will be no cap on the music service’s free tier for six months. There’s no word yet on what type of limit will apply at the end of that six month period. Apparently, encouraging rampant speculation is also part of Spotify’s marketing toolkit, along with limited invitations and massive initial funding ($100 million from Kleiner, DST and Accel).

This do-or-die strategy is risky. Music licensing requires streaming companies to pay labels and publishers for all the songs users stream, even if the streaming service isn’t charging its customers. Offering a free music service for six months, even with millions of listeners, is risky, but it could result in significant rise in market share for Spotify, and right now market share is exactly what the company needs in the U.S., where other streaming music services, like MOG, Rdio, Grooveshark, and Pandora, have a multi-year head start.

It’s possible Spotify is using some of its war chest to pay labels upfront to license during the six-month period. But the company is keeping details close to the chest, so we may not know the particulars for some time.

“We’ve got a number of other exciting marketing activities planned for the coming months, so watch this space,” says the spokesperson. We’ll be watching, alright.