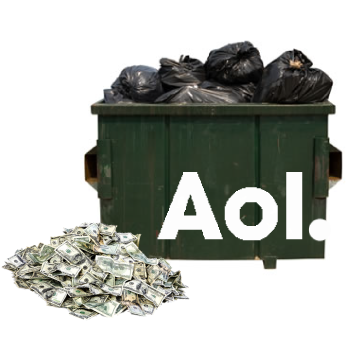 One of AOL’s largest shareholders, Starboard Value LP, has warned  Chief Executive Tim Armstrong that his strategy of transforming the company into a media powerhouse isn’t working.

Over the past few years, AOL has attempted to shift away from its roots as a dial-up internet service provider in favor growing its media and advertising business. The company has also made a number of high-profile acquisitions since 2009, including the $25 million purchase of TechCrunch and the $315 million purchase of The Huffington Post.

Starboard wrote a nine-page letter to Armstrong recently, which points out AOL’s $500 million annual losses and 70 percent decline in stock price in 2011. Shareholders are valuing AOL based on its dial-up business, because they don’t see how the company’s acquisitions have added to the company’s core value. Thus, they’re essentially valuing the media properties at zero.

The investment firm specifically goes after AOL’s local reporting initiative Patch, which it predicts will operate at a loss of up to $150 million in 2011.

“This valuation discrepancy is primarily due to the company’s massive operating losses in its display business, as well as continued concern over further acquisitions and investments into money-losing growth initiatives like Patch,” Starboard wrote in the letter, which was obtained by BusinessInsider earlier today. “We believe the current market price of AOL fails to reflect the substantial value of the sum-of-its-parts. Shareholders have clearly given up hope that the massive investment in the display business, and most dramatically in Patch, will generate an acceptable return on investment.”

Starboard, which describes itself as an investment management firm that seeks to invest in undervalued and under-performing public companies, has a 4.5 percent stake in AOL. Obviously, it wants AOL to turn around, but it certainly isn’t pulling any punches. As BetaBeat points out, Starboard could also be positioning itself to sit on AOL’s board of directors, which has eight spots up for reelection in February 2012.

AOL issued a formal response to Starboard’s letter, which basically translates to uh-uh. The company writes:

“Over the last two years AOL has significantly reduced costs, sold non-core assets, made significant investments for our future, and also recently repurchased over 10% of outstanding shares. AOL has a clear strategy and operational plan to provide our consumers and customers with exceptional value, which we believe will lead to the creation of shareholder value. Our Board and management team remain firmly committed to creating value for all shareholders and we will continue to aggressively execute on our strategy in 2012 as we continue the turnaround of AOL.”