Streaming audio and video services have hit a new high. Traffic from this group now accounts for over 70 percent of North American downstream traffic in the peak evening hours on fixed access networks. Five years ago, it accounted for less than 35 percent.

The company’s streaming service continues to account for more than a third of peak downstream traffic on fixed networks — much more than any other single site or service:

“Streaming Video has grown at such a rapid pace in North America that the leading service in 2015, Netflix, now has a greater share of traffic than all of streaming audio and video did five years ago,” Sandvine CEO Dave Caputo said in a statement. “With Netflix, YouTube, Amazon Video, and Hulu increasing their share since our last report, it further underscores both the growing role these streaming services play in the lives of subscribers, and the need for service providers to have solutions to help deliver a quality experience when using them.”

As you can see, the top three sources of video traffic on fixed access networks in North America break down as follows: Netflix is first by far with 37.05 percent, YouTube is in a respectable second with 17.85 percent, and Amazon Video rounds out the trio with just 3.11 percent. Sandvine adds that all three saw an increase in traffic share over the levels observed earlier in the year. 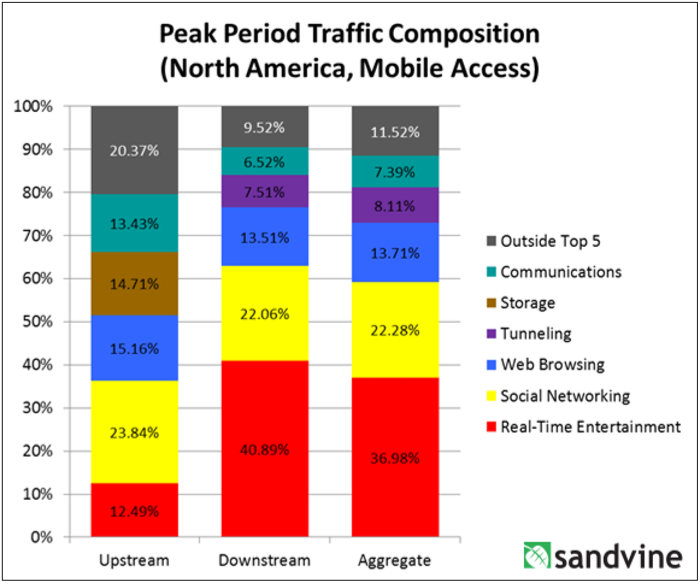 Sandvine also points out that this growth in video is resulting in BitTorrent share continuing to decline in fixed access bandwidth share. The technology now accounts for less than 2.67 percent of downstream traffic during the peak period in North America. For the entire day, BitTorrent only accounts for 5 percent of total traffic, down from 31 percent in 2008.

But this is exactly what BitTorrent wants: The company has made the BitTorrent protocol “congestion aware,” meaning it yields to other traffic during peak usage hours and works more efficiently. In other words, a drop in the percentage does not mean a drop in volume or usage of the technology, but rather a drop in bandwidth share.

“The lower percentage of BitTorrent traffic during peak hours is intentional,” a BitTorrent spokesperson told VentureBeat. “It will also continue to decrease as streaming video takes up more bandwidth (more players in the space’s attempts at HD and 4K accounts for this). And it’s a good thing, it means everything is working the way we intended and the Internet is more efficient and sustainable.”

The story on mobile is a bit different. YouTube accounted for 20.78 percent, while Facebook grabbed 15.96 percent. Mobile browsers rounded out the top three with 10.75 percent:

While using streaming services on mobile devices is unsurprisingly less popular, it’s still by far the most dominant traffic category. In fact, audio and video streaming account for over 40 percent of the downstream bytes on mobile networks.

Social networks still take a sizeable share, even though they typically generate far less traffic than streaming services. On the flip side though, apps like Facebook and Twitter have added auto-playing video, which naturally adds to the bandwidth usage. 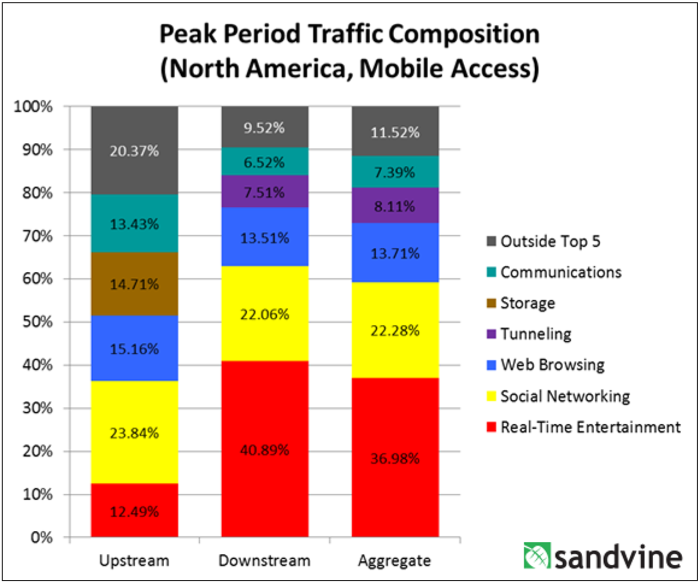 Snapchat, the leading messaging service by volume, generated more traffic each day than the competition, at 4.33 percent. Not only is this more than Facebook’s Instagram, but it’s also higher than streaming services like Pandora and Netflix.

While the two tables show just how differently services are used on fixed connections versus mobile networks, there is one clear trend: Media consumption is the clear winner. As Internet connections become faster and the quality of streams improve, the streaming share will only increase.

Here is the full 17-page report: