Ever since Apple introduced the world to the iPad, connected viewers have flocked to these devices in droves, ushering in not only the post-PC era but perhaps the post-TV era as well.

We’ve measured tablet video viewing trends closely for over two years in our Global Video Index and our data reveals that tablet video surges after Apple releases a new iPad.

As we reported in our Q1 2012 Video Index, after Apple released their third generation iPad, tablet video viewing time per play increased by 26 percent. This increase in tablet video views also corresponded to Apple updating their tablet OS.

Both of these data points suggest that when Apple releases a new generation iPad, connected viewers spend more time “test driving” their new gadgets, and a big part of their unboxing involves streaming video online. 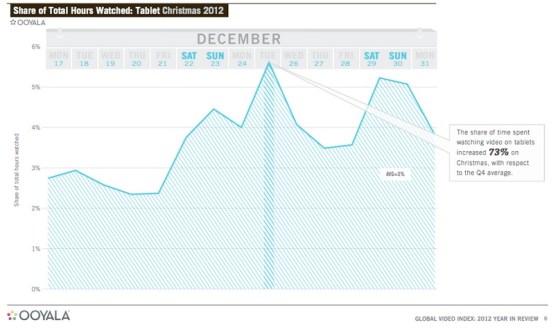 But it’s not only Apple impacting the tablet TV landscape. With Microsoft, Google, and even Amazon delivering more tablets to more consumers than ever before, expect the amount of tablet video viewing to continue to grow this holiday season and into 2014.

Above: The share of tablet TV viewing grew 18% in the second quarter of 2013, and has increased 59% in the first half of 2013, according to Ooyala’s latest Video Index. Overall tablet video viewing share has more than doubled in the past 12 months.

Tablet video viewers are not only watching more online video, they are watching long-form, premium video.

Our data reveals that tablet audiences spend more than half of their viewing time watching premium long-form content running more than 10 minutes. Nearly one third of their time was spent watching video more than an hour long.

The numbers are in and it’s clear that tablets have irrevocably changed the way people consume media today. It is no longer enough to simply enable tablet video for your brand, smart video publishers must devise a tablet video strategy that takes advantage of longer viewing times and audiences hungry for more tablet TV.

Matt Pasienski is the chief data scientist at Ooyala, responsible for transforming crazy amounts of data into meaningful insights. He has a PhD in physics, with emphasis on quantum information, phase transitions and cold atoms, from University of Illinois. He has an undergraduate degree in applied mathematics and physics from the University of California, Berkeley. He is insanely inquisitive, which perhaps more than his education makes him qualified for his job.