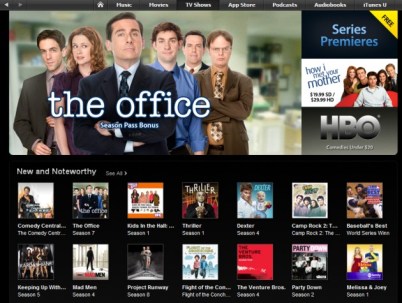 As if we needed more evidence that Apple is planning to launch a new Apple TV (which will most likely be called iTV), now there’s word that the company is preparing to let iTunes users rent TV shows for 99 cents, according to Bloomberg.

Three people familiar with the plan tell the site that Apple is in “advanced talks” with News Corp. to make content from Fox available, and it’s also in discussions with NBC, CBS, and Disney (for content from ABC). Apple CEO Steve Jobs is a Disney board member and the company’s largest shareholder.

The deals would allow Apple to offer new TV episodes within 24 hours of their air date, and they would be commercial-free and playable for 48 hours after purchase.

Currently, iTunes users can rent and purchase movies, but TV episodes can only be purchased (usually for around $2.99). By offering TV episodes for 99 cents, Apple would likely lose many customers who would have purchased the episodes, but it has the potential to attract even more buyers who’ve balked at the $2.99 purchase price. It’s also a way for Apple to combat offerings by Hulu, which makes new TV episodes from most major networks (except CBS) available for streaming, and Netflix, which has an extensive streaming catalog of older TV episodes.

In light of news regarding the iTV, the rental deal makes even more sense. The iTV reportedly won’t have much storage on board, meaning it will likely rely on streaming media directly from Apple. So along with being able to rent TV episodes, don’t be surprised if you’ll also have the option to stream instead of waiting for the video to download.

The sources say that Apple is planning a media event for September 7 (Apple just sent out invites for September 1), at which point it will likely reveal the TV rental plan, as well as the iTV and other new devices.