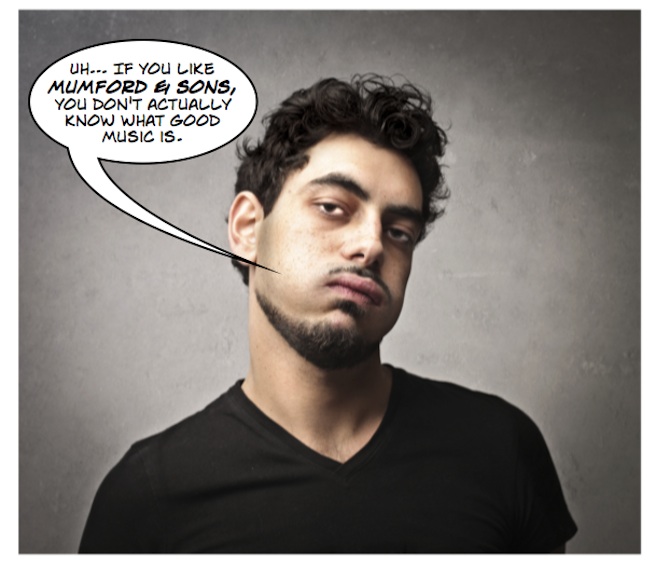 Gritting your teeth long enough to ask the resident music snobs what they’ve been listening to usually provides much better results than most social music discovery technologies.

Music startup TastemakerX understands this. It has created a social game that specifically appeals to those precious music snobs.

Essentially, TastemakerX lets people pull music from several different sources (Spotify, YouTube, SoundCloud) to play songs they believe the community would enjoy. Snobs (which I should probably start referring to as users) get rewarded by participating in a “fantasy football league” for music artists that allows them to assign value to their favorite bands in the form of records, add songs to a collection, and more. Users get rewarded with “notes” for positive interactive with the service, such as if their artists or songs get played a lot by the community, a high level of activity on the service, and other things. You use the notes to “buy” more records. If you are an awesomely good music snob, you’ll continue picking music the community likes, thus improving your status as the most cultured and musically savvy person among your friends.

I don’t really understand the whole concept of framing fantasy football around music, because it just doesn’t translate well. First of all, this isn’t a music service for people who only like to listen to Jock Jams. Second, football players that are more athletic and talented really are more valuable than sluggish second-stringers that rarely see any time on the field. But music aficionados may end up really getting into the new Tastemaker, which will allow the service to create more enjoyable music discovery algorithms that play songs/artists you’ve never heard of and really like. (I also believe the “fantasy music league” angle is superior to the “music stock exchange” angle the company was promoting last year.)

TastemakerX has also secured a new $1.25 million round of funding that it will use to improve development of its music discovery technology platform as well as forge new partnerships. The new funding included investments from Baseline, True, Guggenheim, and AOL.