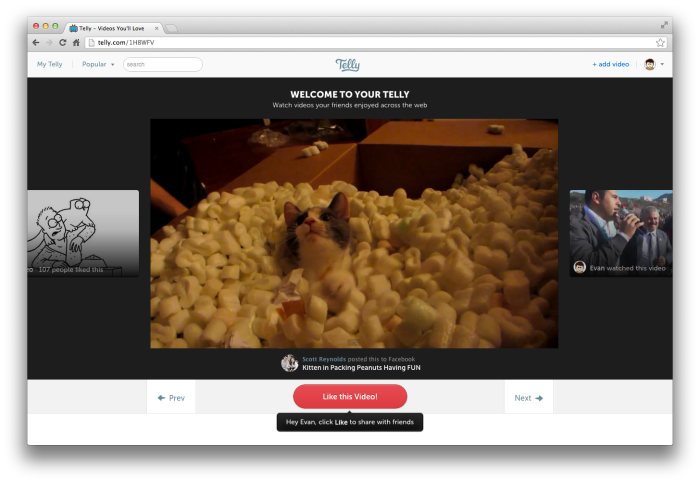 After relaunching as a social video network more than a year ago, Telly (formerly the Twitter video sharing service TwitVid) is now focusing even more on video discovery with the launch of My Telly.

The new product algorithmically generates videos that interest you on Telly’s website and mobile apps, based on what your friends have liked, posted, watched, and discussed. Additionally, the company announced that it has reached 7 million unique users, doubling its user base over the past seven months.

“We started Telly to fix video discovery across the web,” said Telly chief executive Mo Al Adham in an interview with VentureBeat. But the company learned it also needed to do more than just show you the videos your friends are posting on social networks. “We had to add more signal to the feed … we asked ourselves how do we pain a more complete picture of what your social graph is doing,” he added.

The answer for Telly was algorithms — instead of just fishing the videos your friends posted online, My Telly also looks at what your social network is engaged with, and it also keeps track of your viewing habits to figure out what you like. It also takes into account the device you’re using, so longer videos will be prioritized on the desktop, while your smartphone will get shorter clips.

The focus on algorithms is likely a smart move for Telly, as algorithms are increasingly becoming important for all media discovery services.  Consumers are increasingly expecting web services to know what they like, and to present meaningful content without much legwork.

Telly still allows you to upload your own videos, but that’s clearly not as big a feature as it was in the TwitVid days. At the same time, video uploads let Telly straddle a line the normally separates social video apps. ShowYou, for example, is entirely focused on video discovery, while Vine is finding success with its simple video sharing.

“We’ve rallied the entire team around having one unified mission … a mission to communicate to the end users and give them a great content experience on Telly,” Al Adham says. Engagement is surprisingly high on the service, with most users spending around 17 minutes on the site, and typically watching four videos, with every visit.

Looking ahead, Al Adham tells me the company is also looking closely at smart TV platforms, starting with open platforms like Google TV. Like most video services, he wants Telly to be available on every screen a user is watching.