One of Britain’s biggest movie theater chains has revealed plans to let film fans decide which movies are played from a library of more than 400 titles. Vue Cinemas is teaming up with Ourscreen, a social crowdfunding platform that lets people “vote” for a particular movie to be aired by committing to buying a ticket in advance.

Through the platform, users can either sign up to an existing “event” created by others or launch their own by choosing a participating theater and movie. If enough people book tickets, the screening happens — if it doesn’t garner enough traction, users are not charged a penny, and the screening is canned. If a screening is greenlighted, Ourscreen coordinates with the distributor, who delivers the film to the cinema in DCP format and in physical form (disk).

Though Ourscreen already has a number of movie theaters on board, nabbing Vue is a major coup for the fledgling platform. The curated catalog includes a choice of recent hits, cult classics, foreign language flicks, and everything in between. 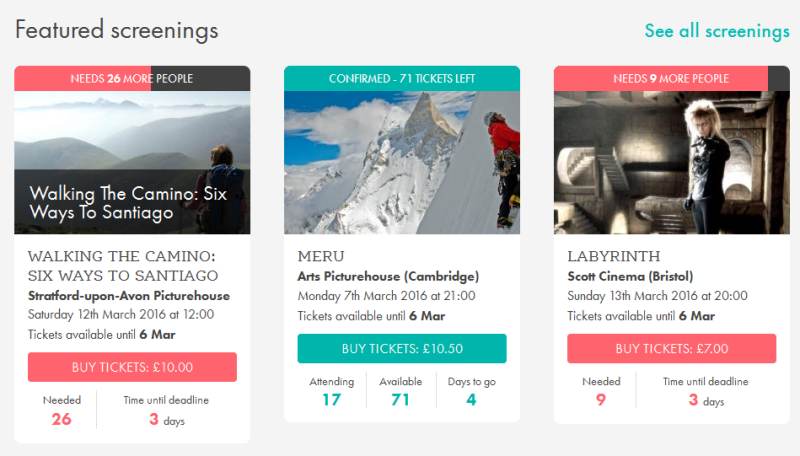 The 400-plus titles available through Vue are also available to other cinemas on the Ourscreen platform, and include the likes of Ex Machina, Suffragettes, Legend, Son Of Saul, Raging Bull, and 2001: A Space Odyssey. New titles are being added all the time, and users are able to suggest new additions to the roster.

The system helps theaters monetize by selling tickets to groups of friends for parties, filling seats that may otherwise have been empty. Though the initiative has yet to take off in a big way, crowdfunded movie screenings is something that I have previously suggested as one of the possible routes toward saving brick-and-mortar movie theaters for posterity.

Ourscreen isn’t the only such platform in existence — Tugg has offered something similar for a number of years in the U.S. And this emerging trend hints at where the movie theater industry could be heading.

Cinema in the on-demand age

The average multiplex may have up to 12 or more movies playing at any one time, which suggests that consumers have “choice” — but it doesn’t always feel that way. And once you remove the sequels and remakes from a multiplex’s offering, how many truly great original flicks does a moviegoer have to choose from?

In an age when people have super-slick home entertainment systems fed by a monthly $10 video-on-demand (VoD) subscription service, it’s easy to see why the super-expensive cinema experience — where tickets cost an average of $8.42 in 2015 (much more in major conurbations) — may be less appealing than 20 years ago. If you can beam Netflix or HBO or Google Play Movies direct to your 50″ screen and surround sound speakers, then a 30-minute drive to the local multiplex may be less appealing.

And this is the crux of the problem. TV has returned in a big way, led by giants such as Netflix and Amazon, which are churning out their own hit shows and movies. Indeed, Netflix was in contention for an Oscar this year with two documentaries (though favorite Beasts of No Nation was snubbed). And last year, Amazon revealed plans to infiltrate movie theaters by producing and acquiring “original movies for theatrical release and early window distribution on Amazon Prime Instant Video.” Though Amazon doesn’t want to kill movie theaters, it does want to shorten the time frame between when a movie is played in cinemas and when it’s available to stream globally to millions.

The line between the old world order and the new VoD industry are blurring. Moviegoers want things faster, and they expect more choice. While there are clear signs that cinema is listening, there is more that could be done.

In the future, why couldn’t movie theaters open entirely to the will of the crowd? Why dedicate two completely sold-out screens to the latest Star Wars installment and leave another 10 screens sitting half-empty? With movie theaters becoming increasingly digital, the need for a physical media format becomes less imperative, so why not allocate more screens in real time to cater to customers? Sure, cinemas would have to rethink the way they schedule films in advance, but it would be easy to create an up-to-date timetable through a mobile app, one that perhaps changes on a day-to-day basis according to demand.

But what the likes of Ourscreen and Tugg demonstrate is that technology offers opportunities to reinvigorate movie theaters. They don’t have to be all about the latest blockbusters.  As good as home-entertainment systems have become, you can’t beat sitting in a dark theater with dozens or hundreds of other people watching Back to the Future in all its silver screen glory. Humans, after all, are social creatures.