Hollywood, despite being ancient and entrenched, is embracing 3D printing in a big way.

To help market The Hobbit: Desolation of Smaug, Warner Bros. will offer fans digital blueprints of “The Key to Erebor,” a key item from the series, which fans can 3D print on their own or send to a company like Shapeways to print for them.

And the Hobbit is not alone. With Ender’s Game, released last month, Hollywood tapped 3D printing company Sandboxr to make 3D-printed replicas of the film’s ships, which fans could tweak and customize to their liking. 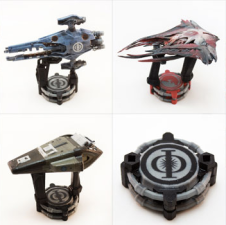 Above: Sanboxr’s Ender’s Game replicas run for $20 each.

Two things should stand out here. First, if you’re a replica maker like Sideshow Collectibles or NECA, 3D printing could erode a good chunk of your business.

Second, and possibility is more optimistic, Hollywood, which has spent years attacking movie pirates, might just go in the opposite direction with 3D printing.

Rather than sue The Lord of the Rings fans who create their own film props and upload them to a site like Thingiverse, Warner Bros is uploading the models itself, boosting both the film’s marketing and the company’s reputation in the eyes of Makers and enthusiasts.

In other words, the movie industry is embracing many of the ideas actor/producer Kevin Spacey championed in the speech he gave back in August. “Give the people what they want in the form they want it in at a reasonable price, and they’ll more likely pay for it than steal,” he said.

That idea might seem obvious, but it’s just about the opposite direction that both Hollywood and the music industry went when they were initially confronted with the Internet. (They’ve since come to their senses — mostly.)

While very few people have access to their own 3D printers right now, the fact that Hollywood is even experimenting with the technology is an encouraging sign of things to come.