Our casual approach to TV viewing is shifting. Social media is increasingly how we learn about TV shows, and sometimes watch them.

What’s more, social media is making the “vast wasteland” of TV a better place. Not only is it helping TV producers understand their audience and improve their shows, using a second screen actually increases viewers’ enjoyment of those shows.

Nielsen confirms the phenomenon in a new study focused on this digital “water cooler,” saying “social TV has changed that relationship… and more and more Americans are quickly warming up to this new behavior.”

These findings are not materially different from a 2013 VentureBeat report on a study by the Council for Research Excellence (CRE). However, the new findings confirm the growing importance of the audience as mobile screens get used more and more.

The old behavior, says Nielsen, is a one-on-one relationship, viewer to TV. For the most part, TV programming itself  provides all the information needed to make decisions on what to watch, with pilots, quickie trailers, and ads for new shows.

But now, those quickie trailers are all over social media. 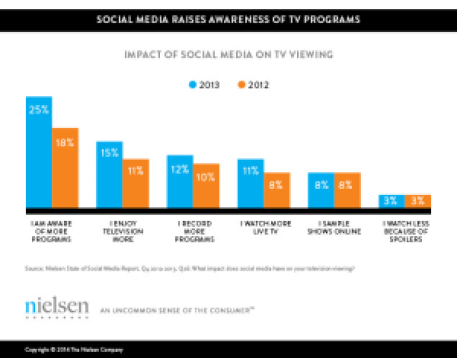 Above: Nielsen Study – Impact of Social Media on TV Viewing

As a result, explains Nielsen, “the social TV phenomenon is not only affecting the consumer TV experience and program development but also proving to be a valuable opportunity for advertisers to tap into and leverage the momentum of social conversations.”

Yep, more advertising. In the name of momentum. Just what we need. But better programming, too, as TV producers learn that the megaphone of social is great for outbound  messages while the microphone of mobile is a terrific way to listen the audience in real time.