Despite having never held public office (nor, perhaps, a computer mouse?), Republican front-runner Donald Trump has a lengthy track record of commentary on tech policy and trends. Trump seems completely out of touch at times, but his positions on mass surveillance, immigration reform, Net Neutrality, major tech corporations, and cyber warfare nevertheless hold weight with a significant portion of the U.S. population, and thus seem worth gathering together for further study.

That’s what we’ve done below. If you’d like to submit a quote, please let us know.

Why doesn’t President Obama just get the people from Google to fix the failed website. In fact, why didn’t he use them in the first place! (2013, Twitter) 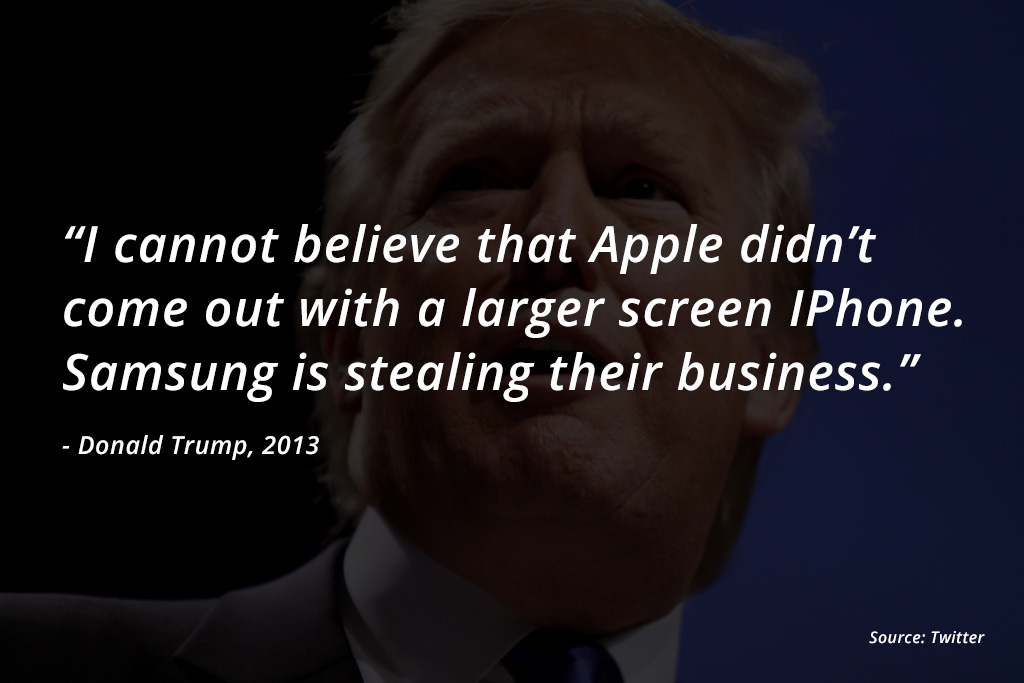 I think what you ought to do is boycott Apple until such time as they give that security number. How do you like that? I just thought of that … Boycott Apple! (2016)

I use both iPhone & Samsung. If Apple doesn’t give info to authorities on the terrorists I’ll only be using Samsung until they give info.
(2016, Twitter)

I predicted Apple’s stock fall based on their dumb refusal to give the option of a larger iPhone screen like Samsung. I sold my Apple stock (2014, Twitter)

We’re gonna get Apple to start building their damn computers and things in this country, instead of in other countries. (2016, The Verge)

If @amazon ever had to pay fair taxes, its stock would crash and it would crumble like a paper bag. The @washingtonpost scam is saving it! (2015, Politico)

What a STUPID deal for Verizon to buy AOL for $4.4 billion. AOL has been bad luck for everyone who touched it. Worth less than $1 billion! (2015, Twitter)

T-Mobile service is terrible! Why can’t you do something to improve it for your customers. I don’t want it in my buildings. (2015, Twitter)

The NYPD Surveillance Program kept NYC safe since 9/11. There will be tragic consequences for ending it. (2014, Twitter)

I didn’t suggest a database-a reporter did. We must defeat Islamic terrorism & have surveillance, including a watch list, to protect America (2015, Twitter)

What China is doing on the cyber warfare front is equally alarming. Cyber spying can isolate network weaknesses and allow the Chinese to steal valuable intelligence. (2011, Network World) 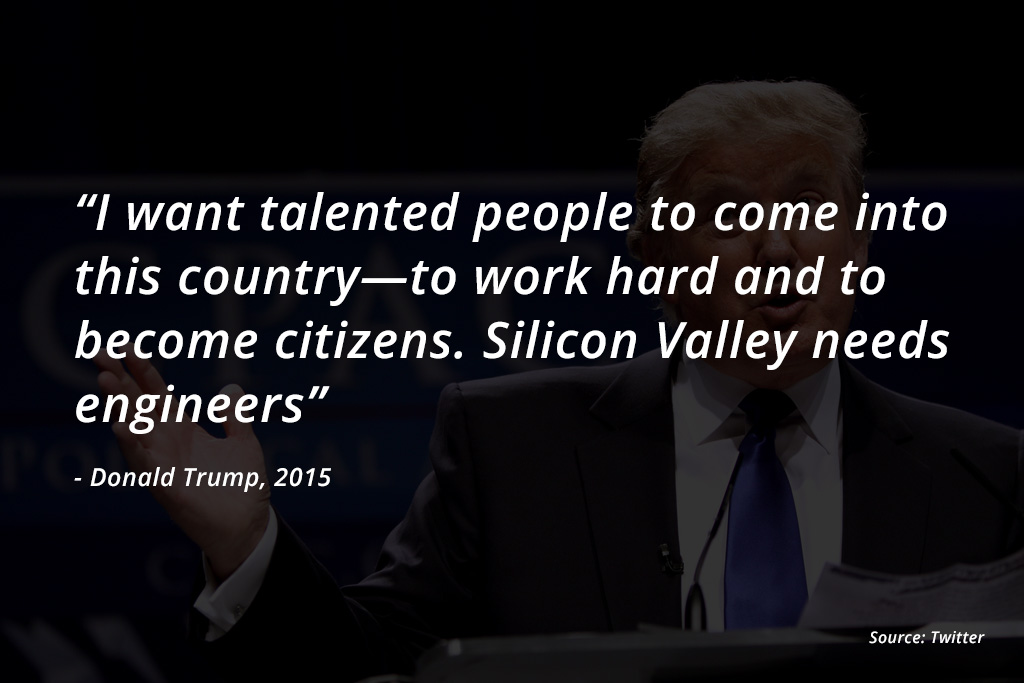 We graduate two times more Americans with STEM degrees each year than find STEM jobs, yet as much as two-thirds of entry-level hiring for IT jobs is accomplished through the H-1B program. More than half of H-1B visas are issued for the program’s lowest allowable wage level, and more than eighty percent for its bottom two. Raising the prevailing wage paid to H-1Bs will force companies to give these coveted entry-level jobs to the existing domestic pool of unemployed native and immigrant workers in the U.S., instead of flying in cheaper workers from overseas. This will improve the number of black, Hispanic and female workers in Silicon Valley who have been passed over in favor of the H-1B program. Mark Zuckerberg’s personal Senator, Marco Rubio, has a bill to triple H-1Bs that would decimate women and minorities. (2015, Network World)

I’m changing. I’m changing. We need highly skilled people in this country. And if we can’t do it, we’ll get them in. (2016, Business Insider)

As President, my goal would be to ensure that the intellectual property produced in America remains the property of those who produce it. Letting other countries steal our property will not happen on my watch. (2015, Breitbart)

It has come to our attention that you have registered the Domain Name STOPTRUMP.US and have made a deliberate attempt to sell T-shirts online using TRUMP and DONALD TRUMP brands without any authorization from Mr. Trump … Your registration (and use) of the Domain Name also constitutes cyber-piracy in violation of the U.S. Anti-Cybersquatting Act … Mr Trump considers this to be a very serious matter. (2015, ArsTechnica) 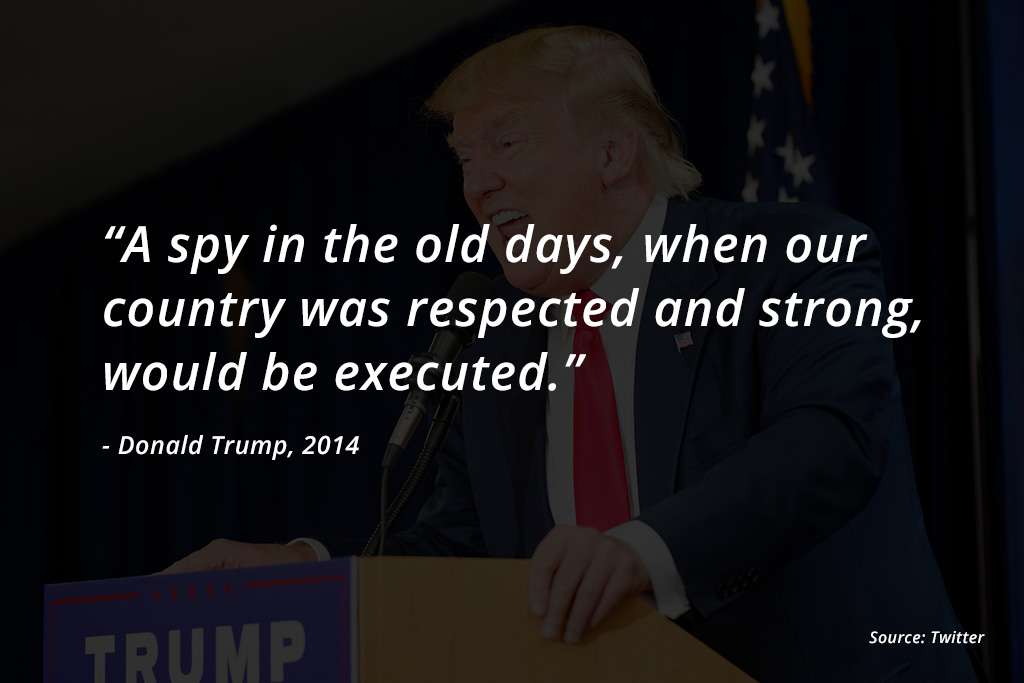 A coincidence that the NSA leaker is living openly in Hong Kong?! At the same time the Chinese Pres. met with Obama in CA. (2013, Twitter)

Snowden is a spy who has caused great damage to the U.S. A spy in the old days, when our country was respected and strong, would be executed (2014, Twitter)

It is very sad to see what @BarackObama has done with NASA. He has gutted the program and made us dependent on the Russians. (2012, Twitter)

You know, in the old days, [NASA] was great… right now, we have bigger problems — you understand that? We’ve got to fix our potholes. You know, we don’t exactly have a lot of money. (2015, Washington Post via Engadget)

This [online gambling] has to happen because many other countries are doing it and like usual the U.S. is just missing out. (2011, Forbes via Engadget)

Obama’s attack on the internet is another top down power grab. Net neutrality is the Fairness Doctrine. Will target conservative media. (2014, Gizmodo)

Okay, well, you just, look, was it a hoax that he’s dragging the flag? Was that him? It looks like the same man to me. He was dragging a flag along the ground, and he was playing a certain type of music, and supposedly there was chatter about ISIS. Now, I don’t know, what do I know about it? All I know is what’s on the internet. And I don’t like to see a man dragging an American flag along the ground in a mocking fashion. (2016, Gizmodo)