Since buying the newspaper and some its smaller publications for $250 million in cash last October, Bezos (himself worth an estimated $27 billion) has set out to modernize the struggling newspaper for the mobile age.

With chief information officer and technology vice president Shailesh Prakash at the helm, Bezos is pumping cash into the once staid company’s IT infrastructure. Lots of it. The new leadership has put 25 computer engineers into the newsroom, helping reporters craft multifaceted digital stories for mobile devices.

Talented techies who would usually steer clear of something called the Washington Post are now flooding Prakash’s inbox with resumés because of Bezos’ cachet.

The paper’s site has been redesigned with a focus on faster load times. Prakash and his 30 member team are designing and building apps, focusing on the mobile domain. They are hiring digital engineers for Post TV, and Prakash’s IT budget has grown accordingly.

Bezos’ financial approach is “allowing us to do serious things,” Prakash told VentureBeat from his Washington DC office recently. “We have not been laggards in pushing the envelope, tech-wise.

“I talk to Jeff as engineer to engineer. Under Jeff, there has been a fresh amount of investment in tech and the newsroom. He’s letting us run our own strategy. He’s not nitpicking us.”

The amiable Prakash meets with Bezos every two weeks via video conference to hash out strategy and new products. Every other month, Prakash flies out to Seattle, or Bezos to Washington, D.C., for a face-to-face meeting. These keep Bezos in the loop, and Prakash listens as his boss expounds on new ideas.

Before hitching his wagon to the Post, Prakash ran Sears’ online retail division. He describes himself as being a big fan of Bezos even before he took the gig. 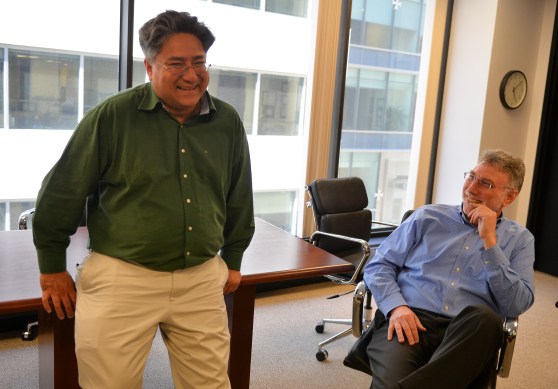 Under Bezos’ ownership, the Post, quite simply, has a new lease on life.

Baron took the editorial helm 18 months ago, leaving the once-bustling Boston Globe to stake his claim in the nation’s politically fragmented capital, at a newspaper that, before Bezos’ arrival, was enduring a severe morale decline and uncertainty about its future. He took the gig after being approached by publisher Katharine Weymouth.

Baron is an editor of the old-school American newspaper variety: blunt, to the point, and not one for conversation for the sake of talking.

But these days, after weathering the collective faltering of American newspapers coast to coast, he sees technology as the medium’s savior — and Bezos’ new tenure as a way to grow readers digitally and turn a profit. Previously, Baron also did editorial stints at the New York Times and the Miami Herald.

“We are reaching more people, telling stories with technology,” he said. “Capital is returning. Our industry is becoming more of a tech industry. It is crucial to its evolution.”

Indeed, the paper has hired more than 50 new employees so far this year.

As for Bezos, 50, Baron said the Seattle-based billionaire is listening.

“He has good ideas and lots of questions,” Baron said.

While physical subscriptions are down, online readership at the Post is up. In fact, 50 percent of all traffic to the site comes from mobile devices like tablets and smartphones. Currently, the site counts 32 million unique readers and viewers checking out its varied milieu of politics and current events every week.

“Mobile interaction at this point is accelerating. The adaption rates for smartphones and tablets is huge,” Baron said.

Baron and his team have spent time — and Bezos’s money — greatly expanding the paper’s blogs, with new ones covering topics such as Internet culture, the military, and health. Three dozen reporters within the newsroom are focused on writing for the Web. News coverage is now in shifts, with an overnight team in place from 6 p.m. to 10 a.m. Eastern time, adding blog posts as the news occurs.

The Post now has what Baron called a “social media news team.”

Bezos, Baron said, is up for the challenge, pointing to the Amazon empire, which did $19.7 billion in the first quarter of 2014 alone.

“Keep in mind that Jeff is running Amazon, which is a lot bigger than the Washington Post. At the Post, he’s involved in strategic decisions and new initiatives.”

Bezos declined an interview for this story.

Before Bezos opened his wallet, the mood at the Post was collectively bereft. Still reeling from the near collapse of the American economy in 2008, which further drained newspapers ad revenue, reporters huddled in clusters in the newsroom, collectively ruminating whether their jobs were safe.

Declining subscription numbers were a constant distraction. While not in a death spiral, the company wasn’t as healthy as it once was.

The Post, in a story announcing Bezos’ purchase last year, painted a disconcerting portrait of a once thriving media entity on the ropes before the Amazon brainchild threw them, in essence, a much needed life raft:

The Washington Post Co.’s newspaper division, of which the Post newspaper is the most prominent part, has suffered a 44 percent decline in operating revenue over the past six years. Although the Post is one of the most popular news sources online, print circulation has dwindled, falling an additional 7 percent daily and on Sundays during the first half of this year.

Under Bezos, the gloom has largely disappeared. And so has the suspicion that Bezos bought the paper as an exercise to stroke his ego.

Post investigative reporter Dana Priest is legendary in American journalism circles. She’s won three Pulitzers, has successfully taken on the U.S. government and was one of the first to expose the CIA’s controversial terrorist rendition program under former President George H.W. Bush.

Before Bezos bought the paper, the mood inside the building was so caustic that Priest refused to come into work, opting to report and write from home instead in order to evade the depression.

“The pressure to cut costs was eating people’s morale. When he [Bezos] first came on, it became evident very quickly that the pressure would be relieved,” Priest said.

Sussing out Bezos’s motivation for buying the paper became, for some, a nearly full-time job. But Priest is confident that Bezos’ motivations are solid.

“I don’t think it’s a vanity project. There’s nothing in his background that says ‘I want to be player in Washington,'” Priest said.

In fact, Bezos has quickly built a reputation as a hands-off owner who doesn’t intercede in the newsroom.

Constellation Research analyst R. Ray Wang said the purchase of the Post makes perfect sense for a person like Bezos. The price was right, and more importantly, Bezos stands a chance of changing this country’s media paradigm if he can figure out a viable way to incorporate the Post into Amazon’s massive distribution network.

Over at the Post‘s IT lab, Prakash said Bezos’ understanding of technology and his desire to build its digital offerings for mobile devices means the paper no longer competes with other traditional media properties. With Bezos as the owner, it doesn’t have to.

“From a technology perspective, it is the Twitters, Facebooks, and Snapchats of the world,” he said.

At the Post itself, the fog has seemingly lifted — for now. The same cannot be said of what’s left of major American newspapers who aren’t graced with an owner touting a colossal bank account.

For the Post, its about leveraging the best technology possible to engage with readers. And advertisers.

“He’s a monster of worldwide distribution of everything,” Priest said. “I’d love for us to become the Amazon Prime Post!”