MindMeld, a pioneer in conversational AI technology, is today releasing the MindMeld for TV platform, which the company bills as the first solution designed for television and over-the-top content providers — like Netflix and Hulu — to deliver best in class discovery through a conversational interface. That company boasts investors and customers like Google, Samsung, Intel, Telefonica, IDG, Spotify, and other major global brands. Since MindMeld provides data services and the underlying tech-for-voice interface, the company couldn’t explain exactly which products in market are 100 percent powered by their technology. But the company’s voice platform is fast, alarmingly accurate, and likely baked into tons of products we interact with in some form or another.

MindMeld was founded in 2011 and is backed by over $15 million in funding. They’ve been busy with that bank roll — building conversational UI for a range of products — and are extremely well-positioned, given the recent “bot gold rush.” The company shows example after example of how voice beats just about every other input for generating a response and even showed off its chops against incumbent giants like the Apple TV voice search.

I caught up with CEO Tim Tuttle to see how the company fits into the broader scheme of AI giants (e.g., IBM Watson, Amazon Echo) and NLP-based startups and to get a view of where we might be headed. It’s clear that voice-as-interface is likely to be integrated into just about every digital interface we participate in — and there’s good data to back that up. For instance, over 15 percent of all search traffic is voice-based, up from near zero as recently as 2014.

“In practically every segment, there are early adopters who are charting the course that we believe will get others to follow. We’re currently engaged with companies in video, music, quick service restaurants, fashion retailing, IoT, and other categories. There is definitely much greater awareness of AI-based conversational interfaces among our target customers than there was even six months ago,” Tuttle told me.

That’s the power of MindMeld’s underlying tech — it’s not just about powering conversational bots on Facebook Messenger and other messaging platforms (the company released its bot platform yesterday, as well). Many AI or natural language processing companies are springing up at the moment as third-party tools. MindMeld focuses on building conversational interfaces powered by its customers’ data — in that sense, the company offers the enterprise on-premise solutions as well as hosted cloud-based offerings.

“There are certainly lots of AI companies springing up right now. Most new companies seem to be either consumer virtual assistant apps focused on a specific use-case or self-service developer tools to build simple NLP or chatbot applications,” Tuttle said. “Our business model is more akin to a company like Palantir. Given that, probably the closest competitor may be a platform like IBM Watson, but, in realty, the market is still developing and head-to-head bake-offs are uncommon. Given the dramatic shift in user behavior we are seeing, this will probably change over the next year.” 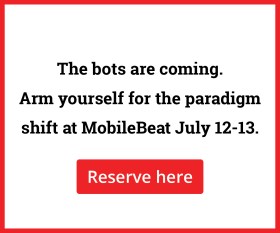 Tuttle, like many others in the media, is particularly unimpressed by the range of bots out there in the wild. He went so far as to say that the best chatbot example he’s seen is the one they’re working on for a large fashion retailer. He’s in the camp that
believes that technology is becoming less of a limiting factor for great conversational experiences — now the key factors to take into account are design, efficiency, and user experience. He’s obviously bullish on the space, but he cautions that expectations may be exceeding reality right now.

“There have been many advances in the past few years that are making it possible for the first time to build NLP systems which can be very useful. You will see many examples of useful conversational interfaces emerge over the next few years, and it will become technology that most people rely on every day,” he explained. “That being said, building a system that can demonstrate truly human-like understanding of open-ended language is beyond the reach of today’s technologies. While everyone in the fields hopes there might be some significant breakthroughs in the next decade, it is still very much a point of speculation.”

As MindMeld rightfully points out, the customer experience shift toward conversational technologies is getting stronger every day. Still, as Tuttle puts it, “Success in this industry will require market pull as much as technology push, and the market should be informed of the opportunity for businesses and consumers. This is the next big thing after touch screens and app stores.”