Digital comic book startup ComiXology has removed 56 comic books from its iOS app store this past week because they contained content that didn’t meet Apple’s guidelines.

More specifically, these comic books contained explicit sexual material — stories involving homosexuality, Satan, and other adult-related themes. Some of the series removed from the store include Angry Youth Comics, Black Kiss, Chicken Soup for Satan, Crawl Space: Xxxombies, No Straight Lines, Omaha the Cat Dancer, Prison Pit, Satan Gone Wild, The Boys vol. 5 from Dynamite, and Image Comics-published series Sex. Interestingly enough, many of the aforementioned comics can still be found within Apple’s own iBookstore. [See the image gallery below.]

“We were notified by Apple that these books did not meet the Apple App Store content guidelines,” ComiXology VP of marketing and public relations Chip Mosher told VentureBeat in a statement. “They were therefore rejected for sale from iOS. Consequently, we pulled them from iOS. Outside the above and our blog post, we don’t have any further comment.”

VentureBeat has reached out to Apple for clarification on the direction it gave to ComiXology about those 56 comic books — as well as why they don’t fall under the company’s content guidelines — and will update the post with any new information.

It’s not exactly clear if Apple specifically indicated to ComiXology that each of the 56 removed comics were against Apple’s guidelines, or if ComiXology was interpreting what they assumed didn’t meet Apple’s content guidelines. Last month, ComiXology incorrectly interpreted those guidelines by removing issue #12 of Image comic series Saga from iOS, which Apple later said it didn’t have a problem with. It’s a bit harder to understand why Image’s Sex series was removed, since it was first banned for the same reasons as Saga and then returned briefly to ComiXology’s iOS app. 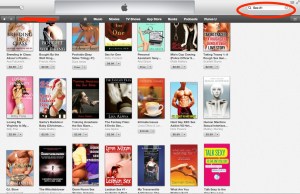 Above: Inconsistent or hypocrite? Searching for Sex #1 pulls up these results in iTunes.

The take away here is that Apple is still vague in regard to what media businesses can and cannot sell on its platform. And since some of the books ComiXology removed are still being sold by Apple, it’s hard to say whether Apple is being hypocritical or inconsistent. Either way, this is frustrating for Apple’s app partners.

Take French digital comics company Izneo, which removed upward of 2,800 of its more than 4,000 digital comics library back in April after being notified by Apple that it needed to remove pornographic content sold within their iOS app, according to Goodreader’s Bridget Alverson. And while Izneo restored some of those comics, 1,500 are still gone.

If there’s an upside to this situation for ComiXology, it’s that these books were only removed from the iOS app but remain available for purchase on its other platforms, such as its Android app and the ComiXology website. Anything purchased on ComiXology’s various platforms will then show up on iOS devices, too. Plus, revenue generated from ComiXology’s website avoids the 30 percent cut that Apple typically takes from all in-app purchases — meaning both ComiXology and the publishers make a little more money on your sale.

But there are still plenty of reasons ComiXology wants to keep Apple happy, as it’s consistently one of the top grossing iPad apps in the App Store and enjoys plenty of promotion by Apple.