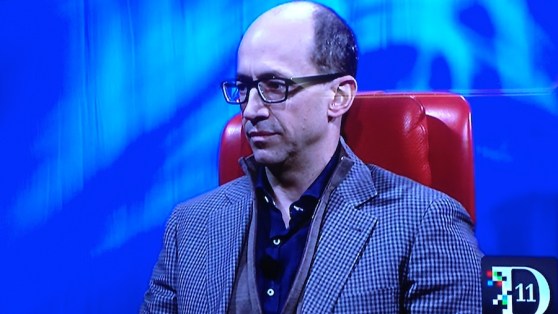 “We view ourselves as complementary to what those folks are doing, and we try to create complementary experiences,” Costolo said today at the D11 tech conference here.

For instance, he said he’s spending a lot of time working on Twitter’s new television partnerships, which advertisers can use to combine television and Twitter ad campaigns.

“It amplifies what is already happening on television, as opposed to detracting from what’s going on,” Costolo said. “It’s a much more engaging experience for users.”

The company is already working with ESPN and Turner Broadcasting, Costolo said, among many others. (It may also be in talks with Viacom and Comcast.)

Costolo repeated a similar line about complementarity later on, when moderator Kara Swisher of All Things D asked him whether Twitter was replacing traditional news publications as a source of real-time news on breaking events — like the Boston Marathon bombing.

“I don’t think of ourselves as a news organization,” Costolo said. “I see ourselves partnering with news organizations to deliver this real-time stream of information to them.” (Twitter is also a discovery and distribution tool for news media).

Costolo acknowledged that early Twitter reports on breaking news can be inaccurate, as when the rumors spread via the service about the ethnicity of the alleged bombers. However, he said, others stepped in to correct those rumors within “minutes,” indicating that Twitter is getting better at self-correcting.

The company’s goal is to iterate as rapidly as possible with mobile products.

To help facilitate that, any team within Twitter can launch any experiment to 1 percent of the users, without approval from Costolo, the legal department, or communications.