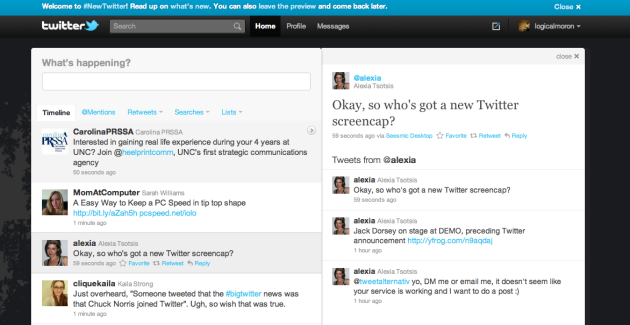 Twitter, the streaming information feed of 140-character fame, announced today that it is revamping its flagship Twitter.com site to break it into a “two-pane” experience that allows users to embed media like photos and videos into Tweets.

By clicking on a Tweet, users can bring up a second pane that brings up a feed of other tweets as well as some information about the user — “all while never losing your place in the timeline,” Twitter co-founder Evan Williams said. The new interface allows users to focus on individual users and bring up a list of previous Tweets, as well as embed photos, videos and maps — and likely other forms of media — right in the stream.

Twitter has exploded in popularity, especially in the mobile market where usage has grown 250 percent since the beginning of the year. About 16 percent of new users come from mobile sources — like Twitter’s iPhone, Android and BlackBerry apps — Williams said.

But Twitter.com is still how most people experience twitter, Williams said. 78 percent of active Twitter users have used Twitter.com in the last 30 days — more people logged in on a monthly basis than almost all other clients, like mobile platforms and TweetDeck, combined. About 25 percent of all Tweets come with links, so it was natural that Twitter evolve to promote that, Williams said.

The new service will launch for some users today, but the whole rollout will be incremental and no specific dates have been hammered out yet. The new advertisement, much like Apple’s recent FaceTime ads, seems designed to pull at the heartstrings — with Indie rock, relationships and romance par for the course.