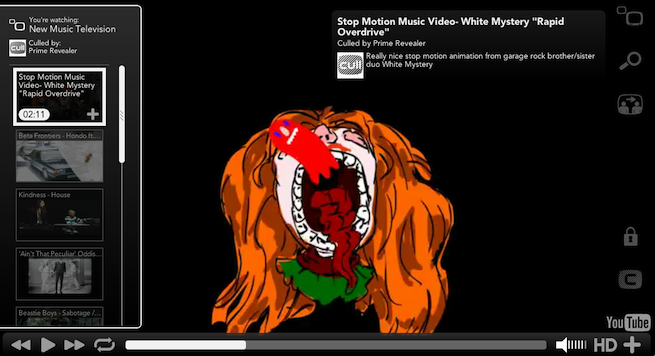 Cull TV, a site that features curated playlists of music videos from indie artists, has been acquired by social video network Twitvid, the companies announced today.

Cull TV is sort of what the internet version of Mtv would probably look like if it was still about music instead of godawful teen reality shows staring quasi-famous celebrities. The site’s user interface is focused on a full “lean back and watch” experience, similar to watching a TV channel. Videos are curated by members of the community as well as an in-house team, but  you can also create your own music video channel stream by adding videos that you’ve watched on the site or elsewhere. The site has over 2 million videos in its library and features 25 standard channels. Cull TV is primarily for discovering new content, which is why its a perfect fit for Twitvid.

“Cull TV is an intelligent, connected social service that can curate content in a different way than what we’re doing on Twitvid,” said Twitvid founder Mo Al Adham in an interview with VentureBeat.”We plan on adding that technology and know-how from (Cull’s) team into the site over the next few months.”

Twitvid relaunched from a complimentary video site for Twitter into a completely new social video network back in December 2011, as VentureBeat previously reported. Users can check their stream of video content from sites like YouTube, Vimeo and others that are shared by friends on various social networks, such as Twitter and Facebook. Twitvid users can also create their own custom channel of content that others can tune in to watch. The site currently brings in over 15 million unique visitors per month.

As part of the acquisition deal, Cull.tv will remain in operation for now, but its future hasn’t been determined, Al Adham said. And while Twitvid will gain a strong community of music video watchers from the new acquisition, it’ll also get Cull TV’s underlying curation technology. Twitvid’s stream is already optimized for video content, but it’ll probably gain a greater degree of sharing and discovery functionality.

Founded in 2009, the San Francisco, Calif.-based startup previously raised a $7 million round of funding from Azure Capital and Draper Fisher Jurvetson in September 2011. Financial terms of the Cull TV deal were not disclosed.