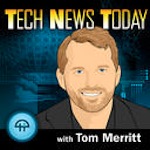 Universal Music Group has taken action to remove a recent episode of Tech News Today from YouTube because it contained clips of a MegaUpload video that Universal claims violates its copyright agreements.

Tech News Today is a web show hosted on Leo Laporte’s TWiT’s web TV news network. In the yanked episode, the show’s hosts were simply reporting on the strange war between Universal and MegaUpload of a music video (dubbed the Mega Video), which features several music artists and celebrities like Kanye West, Will.i.am, Kim Kardashian, Serena Williams, Snoop Dogg and many others. The episode, which aired Monday, contained two clips and only one of them included audio.

As VentureBeat previously reported, Universal contacted YouTube with a Digital Millenium Copyright Act takedown notice, claiming that the work infringed on its copyright and demanding that it be removed immediately. MegaUpload, meanwhile, is now suing Universal for yanking the ad from YouTube, insisting that it contracted with each of the celebrities involved directly and that the music in the ad was an original composition.

Now, it seems Universal is going after any video that has referenced clips as well. This is kind of strange, considering that show’s like TNT were simply providing standard reporting and commentary on the issue, which is generally accepted as fair use when it comes to materials in question of copyright infringement.

“In 10 days a daily news show is worthless, so Universal was able to censor this episode of Tech News Today,” show host Tom Merrit told The Verge.

This type of censorship is precisely what opponents to the Stop Online Piracy Act (SOPA) have been so vocal about lately. The bill would give copyright holders authority to seek court orders against websites associated with infringing, pirating and/or counterfeiting intellectual property. The fear is that many falsely accused sites could get shut down under SOPA. Yesterday, some of the tech world’s biggest names published an open letter in a number of newspapers protesting SOPA and the Protect IP Act (PIPA). And today, a number of technologists involved in building the internet wrote an open letter to Congress against the two bills.

If there’s anything humorous about this situation, it’s that the Mega Video itself was an advertisement for Hong Kong-based cloud and media storage company MegaUpload. Every time Universal removes something with clips referencing the Mega Video, it’s essentially providing free advertising to the company it’s suing, while painting itself as the bad guy.

While you might not be able to watch Monday’s TNT episode on YouTube, the video is still available to view on TWiT.tv.