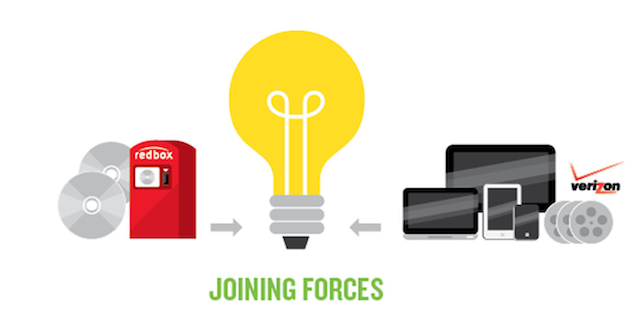 Verizon and Redbox are teaming up on a new video rental service that will directly compete with Netflix, the companies announced in a joint statement today.

The new service will allow people to access streaming video through Verizon, while also taking advantage of Redbox’s DVD & Blu-ray rental Kiosks. At this point it’s unknown if both services will retain their own branding or forge a single brand to unify the service. However, we do know that the companies have formed a new limited liability company (LLC) for the new rental service — with Verizon holding a 65 percent ownership and Redbox holding a 35 percent.

Rumors of a Verizon/Redbox partnership first surfaced in December. And while the new service will definitely be able to compete with Netflix and Blockbuster, it’s unknown if it will adopt a similar pricing plan (e.g. unlimited rentals for a monthly fee). It’s possible that Verizon/Redbox will create a credit-based payment service with options to rent physical media (DVD, Blu-ray), purchase digital downloads or gain access to a video stream, as VentureBeat previously reported.

The partnership does make a lot of sense, especially when it comes to the streaming aspect of the service. Verizon already has several content deals with major television networks from its broadband TV service FiOS, and renegotiating those deals to gain streaming licensing would be easier and (possibly) less costly. If you combine those relationships with Redbox’s major movie studio relationships, you have enough reach to rival Netflix in a big way. Not only that, but Verizon has access to lots of cash to pay for those streaming deals, which might become a hurdle for rival Netflix if its international expansion isn’t successful.

Redbox was always in a better position than Netflix’s DVD-business because it distributes its movies through kiosks rather than sending discs through the mail. Since shipping DVD’s through the mail has a large (and ever-increasing) operating cost, Redbox isn’t spending nearly as much money. The Verizon partnership also allows Redbox to avoid becoming obsolete since it now has a streaming video alternative — which is particularly important as the trend of people switching from physical media to streaming increases.