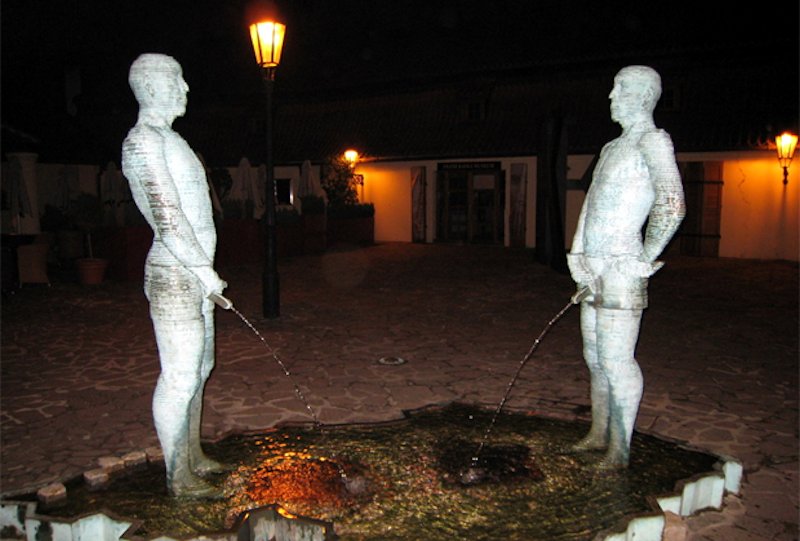 Subscribers of DirecTV’s satellite television service are most definitely not getting their money’s worth as of today — that is, unless you just enjoy watching ultra dramatic fights between companies.

As of midnight, 26 Viacom channels went dark on DirecTV, meaning its customers are now unable to watch MTV, Comedy Central, Spike, VH1, CMT, Nickelodeon, BET, Logo, and a handful of others. That also means those same people lose access to all the popular shows that air on those channels for the foreseeable future.

The channel blackout is due to a contract dispute between entertainment company Viacom and DirecTV. Essentially, Viacom wanted to negotiate a higher price for DirecTV to carry its channels, and DirecTV refused to pay it. The negotiations, which are likely ongoing, weren’t resolved before the original contract ended.

“We are deeply disappointed that DirecTV dropped Viacom’s channels before our midnight deadline this evening, severing our connection with its nearly 20 million subscribers nationwide,” Viacom wrote today in a blog post regarding the dispute. “We proposed a fair deal that amounted to an increase of only a couple pennies per day, per subscriber, and we remained willing to negotiate that deal right up to this evening’s deadline. However, DirecTV refused to engage in meaningful conversation.”

If it’s only a few pennies, then why is DirecTV getting so bent out of shape? Well, for starters those pennies can add up to a lot of money. And when content licensing deals become more expensive, it causes TV service providers to do one of two things: either eat the cost, or pass those new charges along to the customer. Since DirecTV has contracts locking in a monthly rate for some of its subscribers, it would definitely have to eat at least some of these higher costs. Entertainment companies like Viacom would apparently rather demand more money from tradition TV distribution partners than discover new ways of generating revenue via streaming set-top boxes and the web.

But DirecTV isn’t exactly the victim in this situation either. TV service providers don’t allow subscribers to pay only for the channels they watch because each customer would likely end up paying much less money every month. So, if I’m paying $100 per month to watch a third of the channel lineup, I expect my TV provider to ensure those channels don’t disappear.

That said, DirecTV is playing hardball with Viacom without concern for its customers. Of course you wouldn’t know that by flipping on the stations where MTV, Comedy Central, and other channels used to be. DirecTV is currently displaying a message that blames Viacom for the entire ordeal and takes no responsibility for it. The message reads:

“Viacom, the owner of this channel, forced DirecTV to suspend it despite our many requests to keep it on. We’re working to bring it back as soon as possible without an unfair increase to your bill.”

I don’t buy DirecTV’s explanation, which blames Viacom entirely for the situation.

DirecTV could have accepted the fact that its costs were rising for some of its more popular channels and made cuts to its budget elsewhere to ensure its subscribers didn’t get a higher monthly bill. And if it started raising those monthly bills and people canceled their service as a result, DirecTV would have lost even more money. DirecTV also doesn’t mention that you’re stuck paying the exact same amount of money this month as you did last month when there were 26 additional channels.

Disappearing TV channels are on the rise

This isn’t the only instance of entertainment companies and TV service providers participating in a public pissing contest to see which side gives in first. For the last two years Cablevision has threaten to yank Fox TV channels out of its lineup because of contract disputes. In some cases it actually did remove the channels.

Also, last month, Dish Network decided to drop AMC, Sundance Channel, and IFC after AMC Networks demanded a more lucrative deal when its contract ran out. Dish at least had some classiness about the situation when it came to its customers, but the same can’t be said about its treatment of AMC.

When subscribers called in to complain about the loss of the channels, the Satellite TV provider offered them iTunes gift cards to purchase their favorite AMC shows through Apple’s digital store. To add insult to injury, Dish decided to move AMC to another channel number in the middle of a prime time TV program’s premiere, replacing AMC’s former channel number with a live Nickelback concert. Dish Network’s management certainly has a sense of humor, but it comes at the cost of consumer confidence.

AT&T Uverse put up its own damning messages against AMC, but ultimately reached an agreement before the channels went dark.

When these fights break out between entertainment companies and TV providers, there are zero winners and plenty of losers. Consumers are unable to gain access to the content they want in a legal manner, which indirectly promotes pirating of TV shows online. Or those former subscribers just give up altogether on following TV shows. The result is the same: Both entertainment companies and TV service providers stand to lose money, and customers are left with a bad experience.

Update – 7/11/2012 – (2:12 p.m. PT): Viacom just upped the ante in its efforts to force DirecTV to pay higher fees for its 26 TV channels. The entertainment company’s websites for popular shows (SouthParkStudios, TheDailyShow, etc.) are no longer displaying new episodes online. We don’t know for certain that Viacom intentionally took its TV content offline, but the timing is definitely suspicious.

With no access to shows on both the TV or the web, DirecTV customers are either going to start calling the TV provider’s support line with complaints or suffer on without their favorite shows with the hope that this slap fight will be over soon. The downside to this scenario is that no one can access Viacom content online, and consumers are again left out in the cold.

We’ve reached out to Viacom for more information, and will update this post with any new details.

Update #2 – (3:34 p.m. PT): A Viacom spokesperson responded to VentureBeat with the following statement:

“We still have 4,500 of long-form episodes online, for free, but we have temporarily slimmed down our offerings as DirecTV markets them as an alternative to having our networks.  They were always intended to serve as a complement to and marketing tool for our partners.”

I was under the impression that distributing Viacom’s TV content online was done to provide an additional stream of advertising revenue. Yet this apparently isn’t the case. Until Viacom’s channels went dark on DirecTV, its TV content was available on virtually all TV provider channel lineups — meaning it could afford to treat web distribution as a complimentary service. Obviously the playing field has changed for the moment.

Update #3 – (5:00 p.m. PT): Now that word has sufficiently spread about why Viacom is making its TV content unavailable online, people who aren’t DirecTV subscribers are getting angry. Among those “outraged” by Viacom’s actions is consumer rights special interest group Public Knowledge, which issued a statement this afternoon concluding that (surprise!) consumers are suffering the most from this situation.

“Once again it’s viewers who suffer when media companies stall in their negotiations. But the scale of Viacom’s overreaction is unprecedented. Viacom has decided to take a service away from all Internet users in its attempt to punish DirecTV. It is apparent that Viacom puts little stock in the Internet and the online future of video if it is willing to use all Internet users as a pawn in its negotiations. We hope that Viacom and DirecTV can work out their differences quickly so that people can continue to access Viacom’s popular content lawfully.” 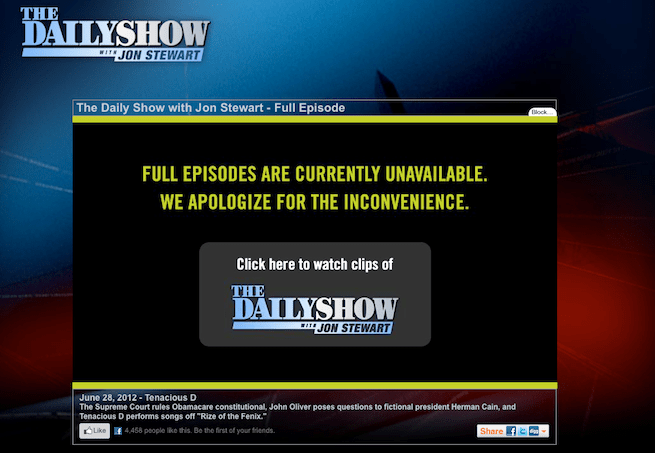