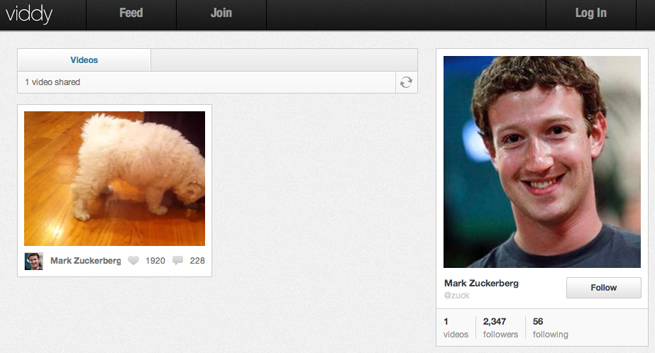 Facebook CEO Mark Zuckerberg has made his mark on the fast-growing video sharing startup Viddy, after signing up for the service and sharing a video of his dog. The move has tech watchers eyeing many comparisons to Viddy and just-purchased Instagram.

After launching its own Facebook Timeline app, social video sharing startup Viddy began to grow at a startling fast rate, eventually adding 5.5 million users in 11 days. Viddy’s successful tie-in to Timeline has prompted other services to launch Timeline apps, including Magisto and Ustream. But Viddy’s success is unparalleled in user growth and with Zuckerberg’s sign up attracting attention, expect many more people to sign up.

Zuckerberg’s first and only post on Viddy is a 15-second clip of his dog Beast playing. It’s not a terribly surprising or exciting video, but when the CEO of one of the hottest companies on the planet posts a clip, people take notice. And hey, who doesn’t like cute animal videos?

Viddy is rumored to be raising a new $30 million round at a potential $300 million valuation. The comparisons to Instagram are natural, as that company focuses on photo sharing (rather than video sharing) and was just bought by Facebook for $1 billion. Since the announcement of the Facebook buy, Instagram has surpassed 40 million users.