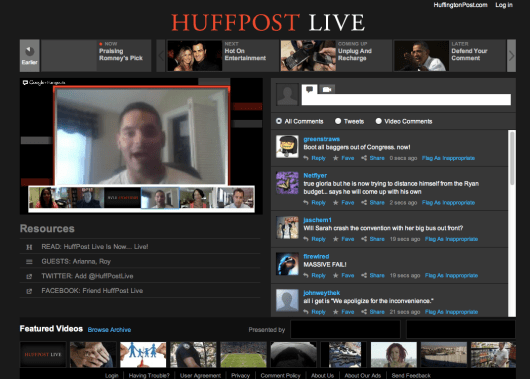 The Huffington Post is making a high-profile jump into the world of video streaming today with the launch of HuffPost Live.

The site will be Huffington Post’s answer to news networks like CNN — but with a major twist. Unlike the major news networks, HuffPost Live was created around viewer engagement. This is clear from the site’s design, which prominently features options for users to submit comments, tweets, and video.

HuffPost Live will also feature viewers in its programming, offering them the ability to talk back to hosts and guest in real-time.

In short, it’s network news created with the Internet generation in mind.

“From the beginning for me the HuffPost has always been about engagement, and that’s the focus that I wanted to bring to HuffPost Live,” HuffPost Live president and co-creator Roy Sekoff said during the site’s first segment this morning.

“We wanted to make this the most social video experience possible,” he added.

HuffPost Live will initially stream content 12 hours a day, five days a week, though the company promises that the site will offer 16 hours of daily content as soon as next year. Eventually, the operation hopes to broadcast 24 hours a day — though that day is probably a long way off.

But while the site hopes to herald the next generation of video news, its backend struggled to keep up today. Video streaming was spotty during the site’s introductory broadcast, oftentimes dropping out multiple times per minute. Hopefully, these sorts of performance issues get ironed out as time goes on.