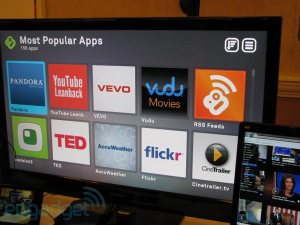 Viewsonic has scrapped its plans for integrating its smart HDTV set with Boxee’s media center software.

The electronics company first debuted a 46-inch HDTV Boxee TV at CES 2011. The set was scheduled to hit retail stores by Q2 of 2011. Viewsonic cited high costs and lack of consumer interest as its rationale for pulling the plug on the product, reports Gigaom.

“Smart TV’ has not achieved the consumer acceptance or market expectation that was forecasted over the last couple years. Our current strategy is to stay involved with the various technology developments and consider them in the future as they become available,” Viewsonic said in a statement about its decision.

The elimination of a Boxee TV set is a minor setback for the company, which is striving to get its media center software on more devices. And while the HDTV-integrated product is dead, the Iomega Network Attached Storage (NAS) device with Boxee integration is still scheduled to debut in October 2011.

Recently, Boxee beefed up its desktop computer software in the latest upgrade and added an iPad app to its line up of connected devices. The company will also continue producing its streaming video set-top box product.