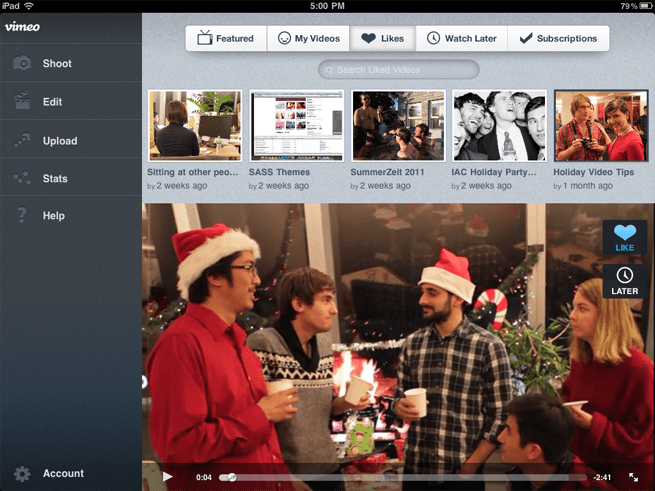 When streaming video service Vimeo launched brand-new Android and Windows Phone applications in early January, the company teased that it was also working on a major update for iOS so it could support the iPad. Now that wait is finally up, with Vimeo launching its much improved iOS app today at Mobile World Congress in Barcelona.

Vimeo told me back in January that total traffic coming from mobile was at 7 percent in Jan. 2010 and that now sits at 15 percent. So clearly the company has realized how important it is to cater its service to the throngs of mobile users trotting iPhones, iPads, Android phones, and Windows Phones.

“We’ve seen mobile traffic triple since we launched our original iPhone app in early 2011,” said Joseph Schmitt, lead mobile developer at Vimeo, in a statement. “Now, we’ve taken what we learned while creating our previous apps and applied it to the updated iOS to improve overall design and usability. We’re especially pleased with the awesome iPad user interface, which the Vimeo community has eagerly awaited.”

Before this update, the company only offered an iOS app to support the iPhone and iPod touch. But now it will work with the iPad, which is especially important because that device is tailor-made for media consumption.

Besides iPad support, the iOS app adds the ability to browse videos while you watch one, making the discovery process better. There’s also a video editor, which is a nice touch especially since the app is free. Additionally, when you edit videos, you can buy and incorporate licensed music from the Vimeo Music Store.

Vimeo has been owned by IAC, which also owns OKCupid, Match.com, Urbanspoon, and The Daily Beast, since August 2006. Vimeo doesn’t reveal paid subscriber numbers, but it does have more than 8 million registered users at present.

The iOS app is free can be downloaded from the Apple App Store. The app is compatible with iOS devices running iOS 4.3 and above.

You can see a few more screenshots of the new Vimeo iPad app below: