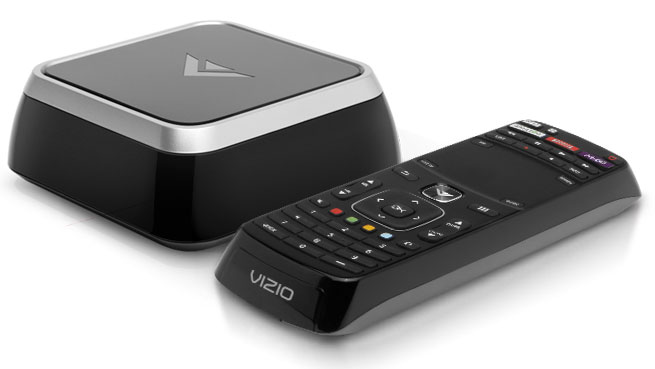 Vizio first made clear its intentions to produce a Google TV box at CES 2012, where the company showed off an unnamed prototype device. The device announced today has 802.11n support, one USB port, HDMI in/out ports, and an option to use a wired Ethernet cable. The Co-Star box will come preloaded with Netflix, Amazon Instant Video, and iHeartRadio  as well as all the other perks that come along with Google TV. One big advantage the device has over other Google TV set-top boxes is its support for cloud-based gaming service OnLive, which lets you stream popular video games to other platforms. Essentially, this makes the Co-Star a legitimate game console competitor.

The Co-Star also has a full-featured Bluetooth remote control with all the standard TV buttons (channels, volume, number pad, etc.), a touch sensitive trackpad, quick buttons (Netflix, Amazon, M-Go), a full Qwerty keyboard, and gaming buttons. Pretty much anything you could possibly conceive of doing on your TV is accounted for.

But the biggest selling point of the Co-Star is probably its $99 price, which is competitive with both the Apple TV and the Roku 2 XS. By comparison, the recently announced Sony next-generation Google TV set-top box is twice that price.

So, when can you get your hands on this bad boy? Vizio hasn’t said, but pre-orders for the Co-Star open up next month.

Check out some images of the device below.