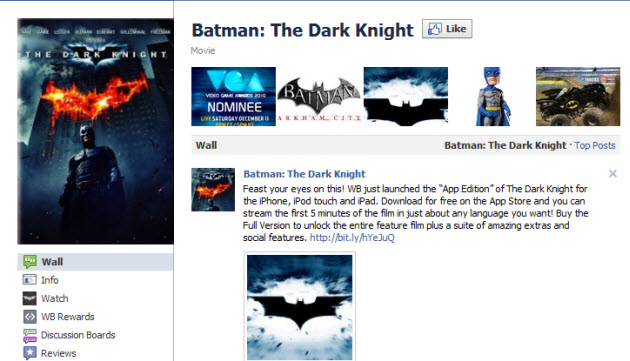 Warner Bros. Entertainment said tonight it will enable Facebook users to rent movies directly on Facebook and watch those movies within the studio’s movie fan pages.

The new movie distribution method marks an attempt to draw new revenue streams from digital online technology — a top priority for Hollywood studios as traditional box office receipts and television viewing decline. What’s cool about watching a movie this way — the studio hopes — is that users will share the movie with their friends and watch it in a communal way as if they were going out to the movies together.

Consumers will be able to use Facebook Credits, the social network’s virtual currency, to rent a title. The program will expand to movie purchases in the near future. Fans who “liked” Christopher Nolan’s blockbuster film The Dark Knight can rent the film through the official Facebook page. Fans can click on the “rent” icon, apply their Facebook Credits (or buy them if they don’t have any), and then start watching the film with in seconds. The cost per rental is 30 Facebook Credits, or $3. The offer only works for U.S. consumers now. More titles will be available in coming months.

“Facebook has become a daily destination for hundreds of millions of people,” said Thomas Gewecke, president of Warner Bros. Digital Distribution.  “Making our films available through Facebook is a natural extension of our digital distribution efforts.  It gives consumers a simple, convenient way to access and enjoy our films through the world’s largest social network.”

Fans can watch the film through their Facebook account for up to 48 hours after purchase. They can watch it in full screen, pause the movie, and resume playing when they log back into Facebook. They can also post comments on the movie, interact with friends and update their status.

The interesting question now is how are they doing this? It could be a virtualization technology, like the kind that OnLive uses. Warner, after all, is an investor in OnLive. Gaikai has also talked about embedding games in sites. Maybe the same can be done with movies.