The Washington Post Company has acquired iCurrent, an online tool that allows users to collect news automatically according to their interest. The purchase price was not disclosed, and while not a big deal, it was likely north of $5 million.

iCurrent had gotten solid reviews for being an easy, albeit no-frills site to let users create automated channels of news depending on their interests. If a user likes wine, international politics, and baseball, for example, they can select those topics, and iCurrent automatically pulls a feed of stories from credible sources to provide that news.

The deal appears to be the company’s first acquisition of an automated news tool of this kind. Several large media companies have acquired small news curation or other social media sites over the past three years, in an effort by larger companies to stay innovative and useful to online readers. Forbes, for example, acquired Clipmarks, which lets users bookmark online news stories. Heart acquired Kaboodle, a social bookmarking site, around the same time. The Washington Post Company, which owns the Washington Post and a number of other news and education properties, such as Kaplan Inc., has lost half its market value over the past three years, in part because of decline in online advertising revenue.

The sole investor in the iCurrent was San Francisco’s Crosslink Capital. Peter Rip, a partner at Crosslink, said the firm invested $3 million total into the iCurrent beginning in 2007, and that the firm made money in the deal.

Washington Post spokeswoman Rima Calderon said her company bought iCurrent for its technology and team, but would not comment on what exactly the company plans to do with it. iCurrent mixes machine learning technology with human curation, and had stayed relatively quiet as it sought to fine-tune its algorithm with a user base of a few thousand users.

Founder Ramana Rao would also not comment on the sale details but said he is excited to be part of the Washington Post. While he said he finds the news industry interesting, he also said it is “a challenging and thankless space,” and so the Post is a good home for pursuing his team’s plans. Indeed, there are at least dozens of news aggregration sites that have popped up over the past three years that have done something very similar to what iCurrent does, so any sale for a profit can be considered a good outcome.

The company was based in South San Francisco, employed seven people, and kept its burn rate down to $100,000 a month. It is Rao’s second startup. Rao earlier founded a company called Inxight, which was a sold to Business Objects. 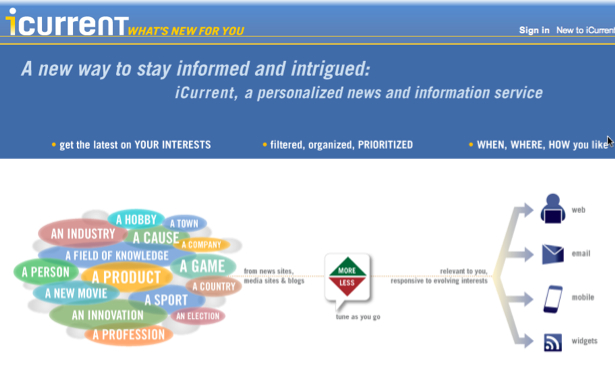