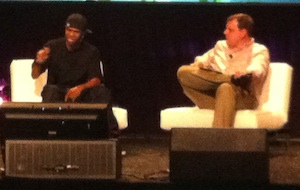 Rapper Chamillionaire has appeared at TechCrunch’s conferences before, but today he seemed to have a chip on his shoulder — or at least a serious message that he wanted to push on the audience.

On stage at the TechCrunch Disrupt conference in San Francisco, Chamillionaire said he read some blog posts and Twitter updates recently wondering why he keeps showing up at tech events. The implication: He’s taking attention away from a more deserving speaker from the tech world.

Chamillionaire said the tech world can’t just talk to itself. Cool companies might launch at Silicon Valley conferences, but the message “isn’t going out to the rest of the world.” Just by appearing at a conference and mentioning it online, Chamillionaire said he’s introducing these startups to a whole new audience.

And there are lots of musicians who might benefit from the new tools, he added. Record company executives are beginning to learn about social networking and other new technologies, but that information doesn’t trickle down to the artists. Yet the musicians are the ones who can actually use their influence to build an audience on sites like Twitter. Plus, musicians need to keep track of the latest developments in technology and business, since technology (namely, Napster) has already disrupted their industry.

“If my ship is about to sink … if I need a life raft, I need to know about it,” Chamillionaire said.

TechCrunch Editor Michael Arrington pestered Chamillionaire to reveal when his next album will come out. The rapper declined to give a date, but he said he wants to get out of his deal with Universal Music Group. Instead, he’s exploring new distribution models.

“In my business right now, you could spend a lot of money to make nothing,” he said.