When Facebook cofounder Chris Hughes bought The New Republic, there was hope that a tech-savvy entrepreneur could save a 100-year-old liberal standby from the slow death afflicting much of print media.

But today, most of the senior editors and contributing authors resigned en masse, protesting Hughes’ strong-arm strategy of trying to save the magazine by transforming it into a “a vertically integrated digital media company” (whatever that means).

TNR‘s recent decline isn’t Hughes’ fault: Print media is on the decline everywhere. Magazines have been hit hardest, since readers now prefer to scan news pnline during work hours rather than soak in a think piece during a leisurely evening on the couch.

Magazines have been facing a debilitating decline in the number of advertising pages they carry. Print advertising spending is steadily falling by billions every year (chart above).

Behind the decline in circulation and ad pages is a simple fact: People are spending less time on each article. Google’s chief economist Hal Varian explained the problem best:

Subscribers to physical newspapers spend about 25 minutes a day reading them. The typical time spent on an online news site in the U.S. and U.K. is about 2-4 minutes, roughly one-eighth as much. Interestingly, newspapers in the U.S. make about one-eighth of their total ad revenue from online ads. If readers spent as much time reading the online content as the offline content, ad revenue from online content would be much closer to the offline revenue.

Earlier this year, University of Chicago economist Matthew Gentzkow attempted to quantify the revenue per hour of print news vs. online news. Advertisers actually spend about 36 percent more per online hour than for physical news, but readers engage with online news for one-tenth of the time. 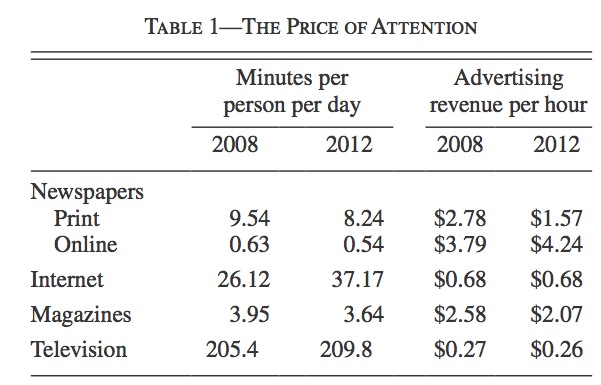 Since online outlets started tracking “read depth,” we know that most readers get through about 50 percent of an article before leaving — and about a third never get past the headline. That makes news economics a volume game, both in terms of content produced and total readers needed, as publishers attempt to make up for their readers’ superficial attention by throwing more headlines and more content at them.

Magazines used to thrive on lean-back think pieces. That’s incredibly hard to monetize on the web. TNR produces a handful of pieces compared to the typical new media outlet. And its pieces are long. A recent piece on transportation startup Uber was around 1,500 words. By new media standards, that’s a feature, not a daily news piece.

Now, this doesn’t mean that thoughtful journalism is dead. One modern strain of journalism tries to condense information into more scannable formats. The New York Times has launched a section, The Upshot, which tells the news in graphs, charts, and maps.

Magazines have also gotten into the multimedia game, with varying success. The Atlantic, also a centuries-old media institution, launched The Wire, a channel of high-volume short-burst stories. Though The Wire has been folded back into The Atlantic‘s regular coverage, today it ran a jobs report in 400 words and put a graph right up top.

So, it is possible to combine thoughtful journalism in a way that jibes with the scanning patterns of online readers. But leisurely, philosophical writing is no longer a sustainable editorial strategy. Hughes knows this.